In a speech at Kyoto University, Ban said Japan, the world's second largest economy and a leader in green technology, had a "moral and political responsibility" to play a bigger role in tackling climate change.

Japan should share its environmental technology with other nations to help reduce their levels of greenhouse gases which cause climate change, as well as help setup active trading schemes for carbon emissions, Ban said.

"Japan can play a leadership role in realizing the potentials of these market-based mechanisms, now and in the future," Ban said in Kyoto, where the landmark protocol on combating greenhouse gases was forged.
More >>>
Posted by Unknown at 12:09 PM

Tokyo - 27/06/2008 = Tony Blair called on the leaders of the Group of Eight nations to map out a practical and effective solution to the problem of global warming as he unveiled a report by the non-profit Climate Group in Tokyo.

One of the key ambitions of the upcoming G-8 summit, scheduled for July 7-9 in Hokkaido, Northern Japan, should be to agree to a global goal of halving emissions of greenhouse gasses by 2050, despite indications that Washington would not support the initiative.
The United States is the world's largest producer of greenhouse gases, although both presidential candidates have committed themselves to reducing emissions, he said. More >>>
Posted by Unknown at 7:41 PM

What liability do oil companies have for climate change?

James Hansen's testimony on climate change has made him a celebrity, but it sadly hasn't done much to influence Congress

It was a sweltering June 23 in Washington, DC, when climatologist James Hansen, head of Nasa's Goddard Institute for Space Studies, appeared before the Energy and Natural Resources Committee of the United States Senate to testify about his certainty that the record high temperatures were the result of human activity. That was 20 years ago.

"The earth is warmer in 1988 than at any time in the history of instrumental measurements," Hansen told senators. "The global warming now is large enough that we can ascribe with a high degree of confidence a cause-and-effect relationship to the greenhouse effect ... Our computer climate simulations indicate that the greenhouse effect is already large enough to begin to effect the probability of extreme events such as summer heat waves."

Do oil companies bear responsabilitiy for misleading the public on the damage to the climate done by carbon output in the same way that the tobacco companies were found liable for denying the dangers of tobacco? Editor. Read More >>>
Posted by Unknown at 8:24 AM

Lord Nicholas Stern has published a set of proposals for a global deal on climate change at the London School of Economics and Political Science.

The document, Key Elements of a Global Deal, has several contributors, with participants from HSBC, IdeaCarbon, Judge Business School at Cambridge University, Lehman Brothers and McKinsey and Company and has been inspired by a number of discussions with international policymakers, financiers and academics.

It suggests a comprehensive and coherent set of proposals to advance the climate change debate on the road to the United Nations Framework Convention on Climate Change 15th Conference of the Parties in Copenhagen in December 2009. More >>>

Global Warming: Is It A Scenario Too Scary To Think About?

To Patricia Kremer, climate change is a runaway train carrying Earth toward a forbidding future.

”Just stop the train,” said Kremer, a retiring marine scientist who has witnessed the effects during her studies of the ocean's environments for 30 years. She and her husband, James, who is also about to retire from a career as a marine scientist and professor, work at the University of Connecticut's Avery Point campus.

She is not alone in thinking this. United Nations leader Ban Ki-moon says that whether you call it climate change, global warming or climate disruption, it's “the defining challenge of our age.”

In November, when Ban made his pronouncement, the 2,500 climate scientists from around the world who comprise the U.N.'s Intergovernmental Panel on Climate Change had just issued their strongest alert about the global disaster threatening the future.

”If there is no action before 2012, that's too late,” said Rajendra Pachauri, the scientist and economist who heads the IPCC. “What we do in the next two to three years will determine our future.” More >>>
Posted by Unknown at 10:39 AM

Nineteen years in development, the FCX Clarity was designed from scratch as a fuel cell vehicle. Only water is emitted from the tailpipe - no greenhouse gases, no smog or soot or other by-products of burning gasoline. More>>>

Coral reefs' vulnerability to global warming has already been established by researchers, but the fish living in the reefs are also at risk, James Cook University's Centre for Excellence in Coral Reef Studies found. "We have already seen episodes of mass die-off of corals as a result of warmer waters associated with global warming, the problem for specialist coral fish is that when the corals die, the fish have nowhere else to go," the centre's Philip Munday said. Munday said there were some 4,000 fish species living in or around coral reefs, providing livelihoods and a major source of sustenance to an estimated 200 million people worldwide. More>>>
Posted by Unknown at 3:59 PM

June 10, 2008 - The world must have a clear plan to fit power stations with facilities to capture carbon dioxide within a year to prevent "catastrophic" climate change, the world's leading scientific bodies said today.

But the warning came as Britain's support for the technology was blasted as "woefully inadequate" by experts. The Royal Society, along with the scientific academies of the eight leading industrial nations and of five other countries including China and India, says that millions will be at risk from food and water shortages if action is not taken. More >>>
Posted by Unknown at 3:42 PM

Changing Jet Streams May Alter Paths of Storms and Hurricanes

Thursday, April 17, 2008 Stanford, CA—The Earth’s jet streams, the high-altitude bands of fast winds that strongly influence the paths of storms and other weather systems, are shifting—possibly in response to global warming.

Scientists at the Carnegie Institution determined that over a 23-year span from 1979 to 2001 the jet streams in both hemispheres have risen in altitude and shifted toward the poles. The jet stream in the northern hemisphere has also weakened. These changes fit the predictions of global warming models and have implications for the frequency and intensity of future storms, including hurricanes. More >>>
Posted by Unknown at 8:08 AM 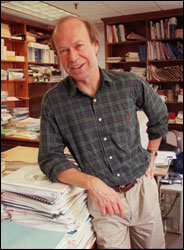 James E. Hansen, the NASA climate scientist who has long had a habit of pushing past where many colleagues dare go in describing the risks posed by global warming, has done it again.

He and eight co-authors have drafted a fresh paper arguing that the world has already shot past a safe eventual atmospheric concentration of carbon dioxide, which they say would be around 350 parts per million, a level passed 20 years ago. (The atmosphere currently holds about 385 parts per million of the greenhouse gas.)

Looking at evidence from past climate swings and greenhouse-gas concentrations, he concludes that a sustained concentration of carbon dioxide at double the 280 parts per million that prevailed for hundreds of millenniums before the industrial revolution would — after a host of slowly-responding feedbacks kicked in to amplify the temperature rise — result in an enormous warming of some 11 degrees Fahrenheit (6 degrees Celsius). More >>>

Latest round of UN climate change talks kicks off in Germany

The two-week round of negotiations will focus on furthering governments’ commitments to the Kyoto Protocol on climate change, and will include discussion on how industrialized countries can meet their emissions reduction targets beyond the first phase of the Protocol, which ends in 2012.
“There is a huge global consciousness that urgent international action needs to be taken this year and the next. So we can expect good progress at this meeting,” said UNFCCC Executive Secretary Yvo de Boer. More >>>
Posted by Unknown at 4:24 PM