Conflict Potential in a World of Climate Change

It is a real pleasure to return to the Bucerius Summer School, bringing together as it does policymakers, academics and business leaders from a variety of fields, but still early in their careers, to discuss some of the most difficult and pressing questions facing the world today. It’s not often that I get a chance to speak to a group of the world's best and brightest professionals whose contributions are still largely ahead of them rather than behind them!

This year's program covers, as always, many of the world's most important and urgent challenges, both longstanding and recurrent problems like regional insecurity, inequality and the need to make our international institutions more responsive and capable, but also new sources of anxiety, instability and potential human misery which are different in nature or scale, or both, from anything which policymakers have previously had to confront. And climate change is the mother of all such issues. More >>> 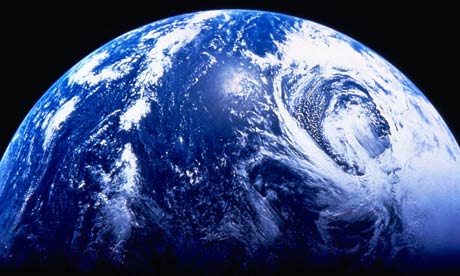 Time is fast running out to stop irreversible climate change, a group of global warming experts warns today. We have only 100 months to avoid disaster. Andrew Simms explains why we must act now - and where to begin.

The Guardian - Friday August 1 2008. If you shout "fire" in a crowded theatre, when there is none, you understand that you might be arrested for irresponsible behaviour and breach of the peace. But from today, I smell smoke, I see flames and I think it is time to shout. I don't want you to panic, but I do think it would be a good idea to form an orderly queue to leave the building. More >>>


GENEVA & NAIROBI (August 22, 2008) - India, Pakistan, Afghanistan and Indonesia are among the pivotal states identified as climate change "hotspots" – countries particularly vulnerable to the increase in extreme drought, flooding, and cyclones expected in the coming decades – according to a new report commissioned by humanitarian relief agency CARE International and the UN Office for the Coordination of Humanitarian Affairs (OCHA).

"Leaders and communities in these pivotal states and in other states at risk in the Sahel, Horn of Africa and southeast Asia are already facing enormous political, social, demographic, economic and security challenges. Climate change will greatly complicate and could undermine efforts to manage these challenges," said Dr. Charles Ehrhart, climate change coordinator for CARE International and one of the report's authors. More >>>

ACCRA (AFP) — 21 August 2008 - Time is running out in the fight against global warming, the UN's top climate change official warned as a new round of UN talks got started here Thursday.

"There is little time left to get a solid negotiating text on the table. Clearly the clock is ticking," said Yvo de Boer, executive secretary of the UN Framework Convention on Climate Change.

"People in a burning house cannot afford to lose time in an argument," he said, citing an Ashanti proverb.

The Accra gathering must strive to "reach agreement on the rules and tools" that developed countries will use to cut greenhouse gas emissions, he told more than 1,600 delegates from 160 nations.

Ghana's President John Kufuor echoed the sense of urgency in his opening remarks, noting that his country was already suffering the consequences of global warming. More >>>

As the only developed nation not to sign the greenhouse gas-controlling Kyoto Protocol, America's stance on climate change has made it easier for major developing countries to avoid acting, Rudd told the Australia-New Zealand Climate Change and Business Conference in the northern city of Auckland.

"I think our first step should be to get the United States of America fully engaged," Rudd said. More >>>
Posted by Unknown at 3:48 PM

Three Big Things We Should Do Now to Slow Global Warming

Amidst all the complexity of international climate change negotiations, it is easy to lose sight of actions we can take now, using proven technologies. Such “immediate mitigation” is essential if we are to avoid irreversible tipping points for abrupt climate change.

There are three very promising ways of meeting the need for speed. Black carbon, the light absorbing matter in soot, warms the atmosphere by absorbing solar radiation and releasing it as heat. It also accelerates the melting of snow and ice by reducing their ‘albedo’ (the ability to reflect light). This is most dramatically demonstrated by the contribution which black carbon is making to the disintegration of Arctic sea-ice, which in turn threatens to accelerate feedback mechanisms that will speed disintegration of the Greenland Ice Sheet. More >>>

But hit by rising fuel costs and worried about the impact of global warming, particularly on its delicate flora and fauna, the small island nation has set itself the ambitious goal of cutting its greenhouse gas emissions to zero.

By 2025, the French territory wants to use renewable energy sources to produce 100 percent of its electricity, and to power all of its transport by 2050.

"We have water, sunshine, we even have an active volcano. We have more energy than we need for our development," Paul Verges, president of Reunion's regional council, said after Group of Eight (G8) leaders agreed a 50 percent cut in carbon dioxide (CO2) emissions by 2050 More >>>
Posted by Unknown at 2:23 PM

Meltdown In The Arctic Is Speeding Up

As a result, scientists say that the disappearance of sea ice at the North Pole could exceed last year’s record loss. More than a million square kilometres melted over the summer of 2007 as global warming tightened its grip on the Arctic. But such destruction could now be matched, or even topped, this year. More >>>
Posted by Unknown at 9:15 PM

"Indigenous peoples are among the first to suffer from increasingly harsh and erratic weather conditions, and a generalised lack of empowerment to claim goods and services," said indigenous peoples expert Regina Laub of the Food and Agriculture Organization (FAO).

Many indigenous groups live in vulnerable environments such as mountainous areas, the Arctic, jungles or dry lands, added the FAO statement released on the eve of the International Day for the World's Indigenous Peoples.

The FAO noted that native populations also played a critical role in adapting to climate change.

Indigenous communities are often the custodians of unique knowledge and skills, the Rome-based agency noted, adding that some 80 percent of the world's remaining biodiversity "that may be vital in adapting to climate change" is found within their territories.

The world's indigenous peoples population is estimated at 370 million, representing at least 5,000 different groups in more than 70 countries.

"Defending the recovery of ancestral lands, the self-determination of indigenous peoples and their human rights is at the core of their claims," the statement added.More >>>

Climate Change in Action in Greenland

Monday, Aug. 04, 2008. You can't see climate change in action, much to the disappointment of photographers and magazine art directors. Warming is a function of time, and we see it only as time passes. Years go by, we add more carbon dioxide to the atmosphere, temperatures rise, glaciers retreat and deserts expand.
One of the essential facts about climate science is that unlike, say, weather forecasting, the farther ahead we look into the future, the more confident we can be of our predictions. So we know that burning enough fossil fuel to raise the concentration of CO2 in the atmosphere to 550 parts per million — twice preindustrial levels — will virtually guarantee a temperature increase of at least 3 degrees F, with all the consequences that will carry. By contrast, we can't look at a hurricane, or at an iceberg melting, and say, "Yes, this is global warming, and we did this." Climate change is change, and change happens over time. More >>>
Posted by Unknown at 11:37 AM JOHANNESBURG (AFP) 2 August 2008 — South Africa's government has set out an ambitious proposal to deal with climate change in the coming years, including slapping a possible carbon tax on carbon dioxide-spewing industries.

"The world faces a global climate emergency. It is now clear that only action by both developed and developing countries can prevent the climate crisis from deepening," environment minister Martinus Van Schalkwyk said in a statement.

The plan, which includes stringent energy efficiency measures, has been endorsed by the cabinet, though parliament must still approve it. Finance officials are investigating ways of implementing the tax. More >>>

Tale of Antarctica not just a story of global warming August 01, 2008: The global warming debate has transformed Antarctica from a forgotten landmass at the end of the Earth to the canary in the mineshaft -- a harbinger, scientists theorize, that will give the world a glimpse into the future.

While the continent has been discussed at length in the recent documentaries An Inconvenient Truth, March of the Penguins and several episodes of the BBC series Planet Earth, no filmmaker has immersed themself in the southern polar region as deeply as Jean Lemire.
The Montreal director, along with a hardy crew of 12 men and women, spent 14 months studying the effects of climate change in Antarctica, and the result is the documentary The Last Continent. More >>>
Posted by Unknown at 4:45 PM