Climate Change: THere is no Plan B

Time is almost up. It is critical we secure a legally binding approach on climate change in Durban

The lesson the world is learning the hard way from the financial crisis is that there is only one boat and we are all in it. To stay afloat, we need rules tough enough to stop systemic risks becoming systemic collapses. This lesson is as true for the environment as it is for the economy.A key battle in the campaign to build an effective system of global rules will shortly take place in Durban, where the UN climate negotiations reopen at the end of this month.
The International Energy Agency has set the scene, with the timely warning in its new World Energy Outlook that we are way off track to avoid dangerous climate change, and that the window for effective action is closing fast.It is fashionable to argue that a new climate treaty, based on the Kyoto architecture of legally binding carbon caps, is dead. We should, on this view, give Kyoto a decent burial and switch to plan B. This turns out to be a looser arrangement in which governments make voluntary pledges to each other. Its advocates often call themselves "realists".The case for voluntarism was first put by those who want to try less hard to deal with climate change. It has subsequently attracted support from academics and other commentators whose concern – indeed alarm – about the climate is unquestionable. They may be desperate rather than cynical, but they tend to know more about the climate than they do about diplomacy.
The problem is in the politics not the architecture.The choice between what needs to be done but looks impossible, and what can be done but is clearly not enough, is as old as history. It lay behind the struggle between Churchill and Halifax as Britain faced Hitler's tanks on the Channel coast. Nato's success in Libya was conducted against a barrage of predictions that it would lead to years of stalemate. When there is no alternative, realism lies in expanding the limits of the possible, not in nourishing the delusion that something else might help. More
Posted by Unknown at 12:20 PM

UP TO 22 per cent of Bahrain's land could be under water by the end of the century as a result of rising global sea levels, it was declared yesterday.

This is based on an Arctic Monitoring and Assessment Programme report, said Bahrain's UN resident co-ordinator Peter Grohmann. It concluded a likely global sea level rise of close to a metre or more by   the end of the century, compared to a forecast of 0.18 to 0.59 metres by the 2007 Intergovernmental Panel on Climate Change (IPCC) report, he added.
"We are awaiting the final report of the second national communication on climate change for Bahrain," said Mr Grohmann. "However, early results of the sea level rise modelling studies off the coasts of Bahrain suggest that between seven and 22pc of the country's entire land could be inundated (with water)." More Bering Sea storm winds are lashing the coast of Alaska. Sea ice extending out from the shoreline has protected the coast from past Bering Sea storm surges, but there is little such ice this year, and global warming is likely to blame.

A powerful fall storm – the strongest since a mid-November storm in 1974 – is pounding Alaska's west coast with hurricane-force winds and a storm surge that in many places is expected to top eight feet above the high-tide line. Although Alaska's coast is sparsely populated compared with other coastal regions in the US, low-lying areas host a number of native Alaskan villages, as well as the city of Nome.
Concerns for flooding and coastal erosion are compounded by a lack of coastal sea ice, which typically extends from the shoreline out toward the open ocean and is building at this time of year. "There's not a lot of shore-fast ice yet," says Scott Berg, a meteorologist with the National Weather Service forecast office in Fairbanks. "This year it hasn't developed quite as extensively as it normally does."

This shore-fast ice, which builds in bays along the coast north of Nome, typically represents a first line of defense against coastal flooding when storms plow into the state's coastline. It reduces storm surge. More

The high water is devastating even for a country inured to monsoon rains and waterlogged rice fields: wide swaths of Cambodia’s countryside have become giant lakes, with villagers and livestock marooned on scattered patches of dry land. 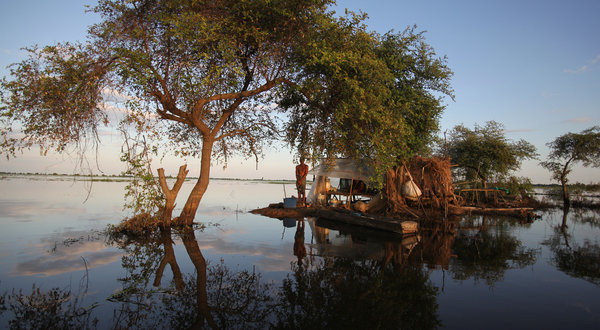 The floods that have affected three-quarters of the country’s land area, by the United Nations’ estimate, have been overshadowed by similar troubles in Cambodia’s larger and wealthier neighbor, Thailand, where the government is scrambling to protect central Bangkok from inundation.

Here in Cambodia, though, aid workers describe a more Darwinian struggle and a generally higher degree of desperation among villagers. “This is the worst I’ve seen in my career,” said Soen Seueng, a 58-year-old doctor who tended to a long line of flood victims on Wednesday, most of them women and children, who were camped on a strip of raised land accessible only by boat.
Dr. Seueng grasped the limp arm of a 6-year-old girl, Lor Chaneut, who received a diagnosis of dengue fever, the mosquito-borne disease that can be fatal without close medical attention. “You must take her to the hospital,” Dr. Seueng urged the girl’s family. The girl’s mother, Jeok Kimsan, said the family’s savings were wiped out by the floods. “We will go to the hospital when we get some money,” she said, as her husband built a fish trap.

Flood victims, many of whom begged a foreign visitor for help, took shelter here under plastic sheeting, like refugees from a civil war. Cows, pigs and chickens shared the strip of dry land, which was covered with animal and human waste. “The toilet is everywhere,” said Henry Y. Sophorn, a Cambodian-born American who represents a nonprofit group, Disadvantaged Cambodians Organization, which is part of a syndicate delivering aid to flood victims.
In Thailand, the government has used helicopters, military vehicles and an array of equipment to reach and assist flood victims, but in Cambodia the work of providing basic necessities has been largely left to private organizations.
“The government can only help a small number of people — they don’t have the capacity,” said Mr. Sophorn, whose organization has supplied 3,400 families with medical care, rice, instant noodles, canned fish and bottled water, using money from a donor in Hong Kong who has asked to remain anonymous.

With little or no government assistance, many villagers have been left to fend for themselves. “The big impact is just starting,” said Sen Jeunsafy, a spokeswoman in Cambodia for Save the Children, an international aid organization. “What we have done is provided immediate relief. But collectively, we have not been able to reach every family.” More

A draft UN report three years in the making concludes that man-made climate change has boosted the frequency or intensity of heat waves, wildfires, floods and cyclones and that such disasters are likely to increase in the future.

The document being discussed by the world's Nobel-winning panel of climate scientists says the severity of the impacts vary, and some regions are more vulnerable than others.
Hundreds of scientists working under the Intergovernmental Panel for Climate Change (IPCC) will vet the phonebook-sized draft at a meeting in Kampala of the 194-nation body later this month.

"This is the largest effort that has even been made to assess how extremes are changing," said Neville Nicholls, a professor at Monash University in Melbourne, Australia, and a coordinating lead author of one of the review's key chapters. Mindful of an outcry by climate skeptics over flaws in an earlier IPCC text, those working on the document stress that the level of "confidence" in the findings depends on the quantity and quality of data available.

But the overall picture that emerges is one of enhanced volatility and frequency of dangerous weather, leading in turn to a sharply increased risk for large swathes of humanity in coming decades. More