Speaking in the capital, Saran said that India was keen to see technologies that could make substantial impact in reducing climate change should be dealt with in the same manner as HIV drugs.

Under the global intellectual property rights regime, special provisions had been made to ensure IPR issues did not hamper the flow of life-saving medication during emergencies to countries that do not have these drugs. More >>>
Posted by Unknown at 8:34 PM

HONOLULU, Hawaii, January 28, 2008 (ENS) - Rich in sun and wind, Hawaii is on track to become one of the world's first economies based on clean energy resources under a long-term agreement signed today by representatives of the state and federal governments. The agreement sets a goal of using renewable resources such as wind, sun, ocean, geothermal, and bioenergy to supply 70 percent or more of Hawaii's energy needs by 2030.

Hawaii Governor Linda Lingle and Alexander Karsner, U.S. Department of Energy, DOE, assistant secretary for energy efficiency and renewable energy, today signed a Memorandum of Understanding to establish the Hawaii Clean Energy Initiative. The goal is to reduce the state's dependence on imported oil and help bring energy price stability to Hawaii consumers.Hawaii gas prices are the highest in the nation. AAA and the Oil Price Information Service say the national average is $2.98 a gallon. In Hawaii, it's $3.50 a gallon, up 56 cents from a year ago.

Another goal of the initiative is to curb climate change. In 2007, Hawaii became the second state in the nation, after California, to establish a cap on greenhouse gas emissions.

[Perhaps a similiar intitiative will be extended to the British Overseas Territories by the United Kingdom. Editor] More >>>

July 25, 2008; Under a subpoena threat from Sen. Barbara Boxer (D-Calif.), who chairs the Senate Environment and Public Works Committee, the Environmental Protection Agency late Wednesday sent the panel a copy of its Dec. 5 proposal to regulate greenhouse gases under the Clean Air Act -- as a brief loan.

Three Senate Democrats -- Boxer, Benjamin L. Cardin (Md.) and Amy Klobuchar (Minn.) -- huddled together with their aides to review the documents, which were e-mailed to the White House Office of Management and Budget last year in response to a 2007 Supreme Court decision on the matter. The senators had to return the document after reading it.

The White House never opened the document and instructed EPA to retract it. Instead, EPA Administrator Stephen L. Johnson backed away from the conclusions that he and his staff had reached and last week issued an "advanced notice of proposed rulemaking" that invited public comment on the question of whether to regulate emissions linked to global warming.More >>>
Posted by Unknown at 7:32 AM

Climate change: feed it and weep or lead and reap

July 25, 2008: Australia will reap important benefits from the carbon pollution reduction scheme. Properly, the Government has left itself considerable flexibility on several points, which will depend heavily on what other countries do. But the value of the scheme lies not in the details but in three more basic considerations.

Australia can now lead economically, technologically and diplomatically in the global effort that lies ahead.
A global climate control regime is on its way. It will almost surely not be a global emissions trading system, but a regime in which participating countries commit to national targets implemented through national means. The Government's proposals can work whether or not global trading comes to pass. More >>>
Posted by Unknown at 1:39 PM

It is worth looking at the web site
Posted by Unknown at 3:27 PM

Channel 4 to be censured for controversial global warming film

London - 19/07/2008 - The makers of a Channel 4 documentary which claimed that global warming is a swindle misrepresented the views of some of the world's leading climate scientists, the media watchdog is expected to rule next week.

In a judgment at the end of a 15-month enquiry, Ofcom is expected to censure the channel over The Great Global Warming Swindle, broadcast in March last year.

The film sparked outcry from environmentalists and led to a complaint from a group of senior scientists about apparent errors, distortions and misrepresentations.

It is thought that complaints about privacy and fairness from the Government's former chief scientist, Sir David King, and the Nobel peace prize-winning Intergovernmental Panel on Climate Change will be upheld on almost all counts. More >>>
Posted by Unknown at 1:49 PM

"This administration did not believe in global warming," Schwarzenegger told ABC News' George Stephanopoulos in an exclusive interview that will air Sunday on ABC's "This Week."

"They just didn't believe in it or they didn't believe that they should do anything about it, since China is not doing anything about it and since India is not willing to do the same thing, so why should we do the same thing?" Schwarzenegger said. Schwarzenegger's comments came in reaction to the Environmental Protection Agency's recent decision not to take further action against global warming during the remainder of Bush's presidency. More >>>
Posted by Unknown at 9:29 AM

July 11 2008 - Windows could be turned into solar panels using a new technology which could slash the cost of making electricity from sunlight.

The technique involves painting the glass with a transparent, organic dye to absorb and transport light to photovoltaic (PV) cells in the window frame, which convert it to electricity. Engineers from the Massachusetts Institute of Technology in Boston claim the system could generate ten times more power than a PV cell alone. It could also substantially reduce the cost of generating solar power, because the expensive cells need only be mounted around the edge of the panels.

Traditional panels use mobile mirrors to track the sun and focus the rays onto a solar cell, but the moving parts are expensive. The MIT team found that by using specific combinations of dye, which each absorb a different wavelength of light, they could avoid light being lost as it travelled to the solar cells at the edge. Electrical engineer Marc Baldo, who lead the team, said the 'solar concentrator’ system is simple to manufacture and could be implemented within three years.

The materials also can be added to existing solar panels. "We think this is a practical technology for reducing the cost of solar power," he said. More >>>
Posted by Unknown at 8:49 PM

Known as the Vulcan Project, for the Roman god of fire, the inventory catalogues how much carbon dioxide different human activities produce on an hourly, daily, and monthly basis—from vehicles to industrial activity to electricity used by homes or businesses. More >>>
Posted by Unknown at 5:07 PM

G8 urged to do more for climate 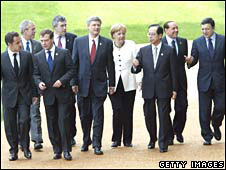 Five of the biggest emerging economies have urged leading industrial nations to do more to combat climate change.

Mexico, Brazil, China, India and South Africa challenged the Group of Eight countries to cut their greenhouse gas emissions by more than 80% by 2050.

The so-called G5 countries threw down the gauntlet in a statement before they joined the G8 summit in Japan.

Earlier, the G8 restated a lower target of 50% cuts over the same period, which environmentalists said was "pathetic". More >>>
Posted by Unknown at 4:13 PM

FORT LAUDERDALE, Florida, July 7, 2008 (ENS) - Nearly half of U.S. coral reef ecosystems are considered to be in "poor" or "fair" condition according to a new analysis of the health of coral reefs under U.S. jurisdiction by the National Oceanic and Atmospheric Administration, NOAA.

The report was released by NOAA today at the opening of the 11th International Coral Reef Symposium in Fort Lauderdale where more than 2,500 scientists and government officials are gathered this week to discuss coral reef protection strategies and research priorities to further protection of sensitive coral ecosystems.

The symposium's theme, Reefs for the Future, highlights the importance of the world's coral reefs, as well as the urgent need for accelerated action to protect them. More >>>

PARIS (AFP) 4 July 2007— The head of the UN's Nobel-winning panel of climate scientists on Friday said only seven years remained for stabilising emissions of global-warming gases at a level widely considered safe.

Rajendra Pachauri, chairman of the Intergovernmental Panel on Climate Change (IPCC), delivered the bleak warning at a gathering of European Union ministers where he pleaded with the EU to take the lead in global talks on tackling climate change.
The UN negotiations "must progress rapidly, otherwise I am afraid that not only future generations but even this generation will treat us as having been irresponsible," said Pachauri.
"The EU has to lead. If the EU does not lead, I am afraid that any attempt to bring about change and to manage the problem of climate change will collapse," said Pachauri. More >>>

'US has done least to address global warming'

NEW DELHI: 3 Jul 2008. The US has done the least among the world's eight biggest economies to address global warming, a study released on Thursday found.

The G8 Climate Scorecards 2008, released ahead of next week's gathering of the Group of Eight on the northern Japanese island of Hokkaido, also found that none of the eight countries are making improvements large enough to prevent temperature increases that scientists think would cause catastrophic climate changes.

The gathering includes the heads of statesof the US, Japan, Britain, Germany, France, Italy, Canada and Russia. More >>>
Posted by Unknown at 6:48 PM

July 1, 2008: Plenty of companies are angling to make money off climate change sometime in the future. The insurance industry isn’t waiting around for the science or the politics to settle: It’s raising premiums now on the premise that rising temperatures will lead to more hurricanes, more damage, and more claims.

M.P. McQueen reports today in the WSJ that insurers across the U.S. are increasingly relying on “computerized catastrophe modeling” which tells them just what they want to hear: Hurricanes will get bigger and more frequent in coming years, so homeowners in coastal areas have to pony up even more to protect their houses—even as insurers rack up record profits. The shift from using historical data to computer models is to blame, the paper says:

Companies that rely too heavily on cat-model data “are subjecting their businesses and their customers to the volatility of computer models,” says [Karen] Clark, who now runs a Boston cat-model consulting business. “The models are being used as if they produce definitive answers rather than uncertain estimates.” Ms. Clark says she advises clients to use them in conjunction with other factors, such as broad historical data. More >>>
Posted by Unknown at 8:49 PM