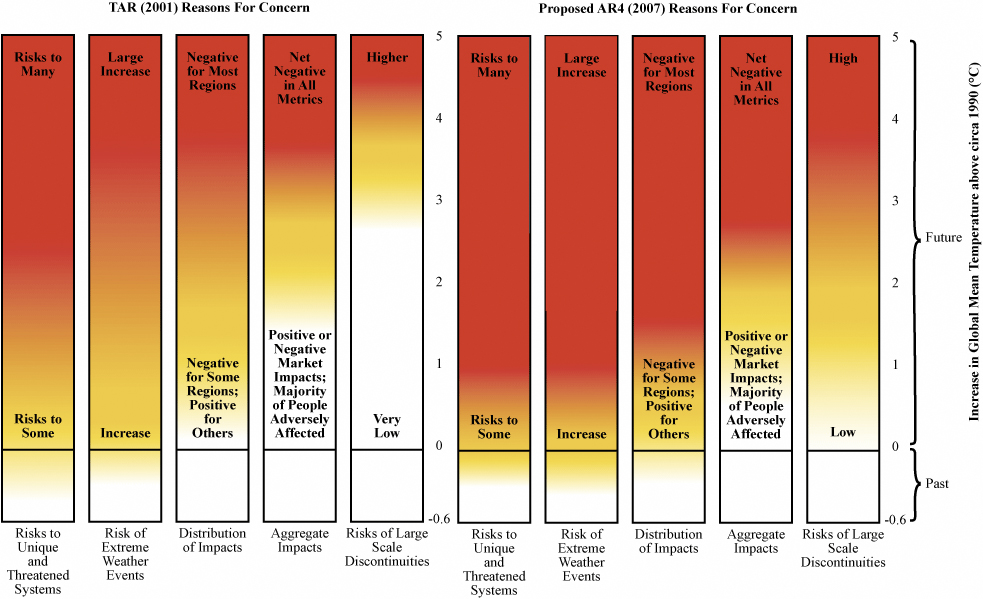 In 2001, when the Intergovernmental Panel on Climate Change produced its third set of reports examining the causes and consequences of global warming, it included a fascinating illustration, called the “burning embers” diagram, showing gradients of rising risk with rising temperatures.

It was part of the panel’s evolving effort to provide policymakers with a clear sense of what was known about potential impacts from various levels of warming and also what was uncertain.

An updated version of the diagram was created for the panel’s momentous 2007 report on climate, but it met resistance from some scientists who thought the color bars were too vague or subjective and from some governments, which thought the artwork was too unnerving, according to interviews with the lead authors. More >>>
Posted by Unknown at 5:20 PM 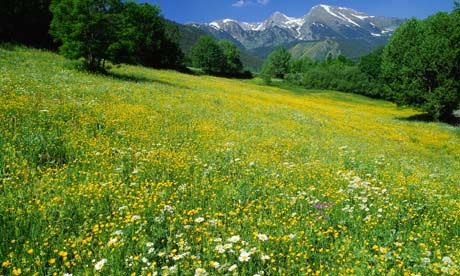 Spain loses 90% of its glaciers thanks to global warming, threatening drought as rivers dry up

The Pyrenees mountains have lost almost 90% of their glacier ice over the past century, according to scientists who warn that global warning means they will disappear completely within a few decades.

While glaciers covered 3,300 hectares of land on the mountain range that divides Spain and France at the turn of the last century, only 390 hectares remain, according to Spain's environment ministry.

The most southerly glaciers in Europe are losing the battle against warming and look set to be among the first to disappear from the continent over the coming decades. Their loss will have a severe impact on summer water supplies in the foothills and southern plains south of the Pyrenees. More >>>
Posted by Unknown at 5:11 PM

A new carbon detective to study how half of gas disappears

February 23 2009 - Thirty billion tons of carbon dioxide go into the air from the burning of fossil fuels each year. About half of it stays in the air. The other half disappears. Where it goes, nobody quite knows.

With the Orbiting Carbon Observatory, a NASA satellite scheduled to be launched Tuesday morning from Vandenberg Air Force Base in California, scientists hope to better understand the comings and goings of carbon dioxide, the main greenhouse gas driving the warming of the planet.

The new data could help improve climate models and improve the understanding of the "carbon sinks" like oceans and forests that absorb much of the carbon dioxide. More >>>

February 20, 2009 - If Hashem Akbari's plan to stave off global warming is realized, it will come one rooftop at a time.
Akbari, a senior scientist at the Lawrence Berkeley National Laboratory, and a group of fellow geoengineers who are trying to counter the effects of climate change, have developed a relatively simple idea to offset carbon emissions and cool the Earth's urban surfaces: Make all rooftops and paved surfaces white.

Or at the very least, convert them to cool gray colors to reflect the sun's rays, instead of attracting and absorbing heat.

"We won't be solving the problem of global warming, by any means," Akbari said, "but we will be buying ourselves a little bit of breathing time."

Akbari, 59, who has published several papers and studies on the cooling effects of white surfaces, is hoping to launch a 100 Cool Cities program in which the hottest urban municipalities internationally would convert government-owned buildings to white roofs and offer homeowners incentives to make the switch.

"There are billions of roofs out there we'd have to change," Akbari said inside his office at the Lawrence Berkeley campus, beneath a roof that converted two years ago at Akbari's suggestion. "So this cannot be purely an informational program. This would have to be an action program, where the entire world organizes under one winning flag." More >>>
Posted by Unknown at 6:06 PM

9 February 2009: In a speech given at the opening of the Fifth General Meeting of the UN and Caribbean Community and Common Market (CARICOM) and its Associated Institutions, taking place in New York, US, UN Secretary-General Ban Ki-moon stressed the need for the two institutions to step up their collaboration in the face of multiple global crises.

He noted that Caribbean countries were among the first to “sound the alarm about global warming,” as climate change threatens their economic viability and “sometimes even their very existence.” He underlined that the predicted increase in frequency and intensity of hurricanes in the region will impact severely the tourism industry that accounts for an important part of many small island developing States’ gross domestic product. Ban stated that the global financial crisis and climate change can be addressed “in tandem,” highlighting the link between achieving economic prosperity and preserving the environment, and called for making the transition to a new green economy a priority. [The Statement] 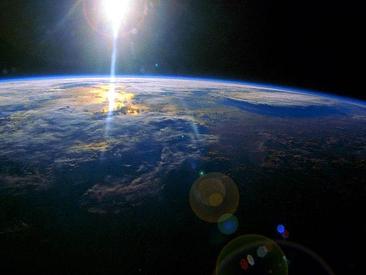 ScienceDaily (Feb. 13, 2009) — "Business managers of media organizations, you are screwing up your responsibility by firing science and environment reporters who are frankly the only ones competent to do this," said climate researcher and policy analyst Stephen Schneider, in assessing the current state of media coverage of global warming and related issues.

Schneider, a coordinating lead author of chapter 19 in the report of the Intergovernmental Panel on Climate Change published in 2007, is calling for the news media to employ trained reporters in covering global warming. He will be discussing this and other issues in the symposium "Hot and Hotter: Media Coverage of Climate-Change Impacts, Policies, and Politics," on Feb. 13, 2009 at the annual meeting of the American Association for the Advancement of Science in Chicago.

"Science is not politics. You can't just get two opposing viewpoints and think you've done due diligence. You've got to cover the multiple views and the relative credibility of each view," said Schneider, a senior fellow at Stanford's Woods Institute for the Environment. "But that is not usually the problem of the well-trained reporters, who understand what is credible. More >>>
Posted by Unknown at 12:32 PM

BAROUK (Lebanon): Lebanon’s majestic cedar trees have withstood the test of time for centuries but climate change is threatening the country’s most treasured symbol.

Used by various civilisations throughout history for their strong and durable wood, Lebanon’s cedars are now on the International Union for Conservation of Nature’s Red List as a “heavily threatened” species.

Local experts and environmentalists warn that global warming could have a negative impact on the cedars.

“Enough talking about the need to preserve the cedars, it’s time for action. We must preserve the trees now,” said Nizar Hani, scientific coordinator of the Al-Shouf Cedar Nature Reserve in the mountainous Shouf area southeast of Beirut.

“All indications are that if the current climatic changes continue, the cedars could be in danger.” Lebanon’s largest reserve, where 25 per cent of the country’s 2,000 hectares (nearly 5,000 acres) of cedar trees are located, was established in 1996, stretching from Dahr al-Baidar in the north to Niha Mountain in the south.

Some of the reserve’s cedar trees, which belong to the pine family and have needle-like leaves bearing seeds in scaled clusters, are estimated to be 2,000 years old. More >>>
Posted by Unknown at 8:16 AM 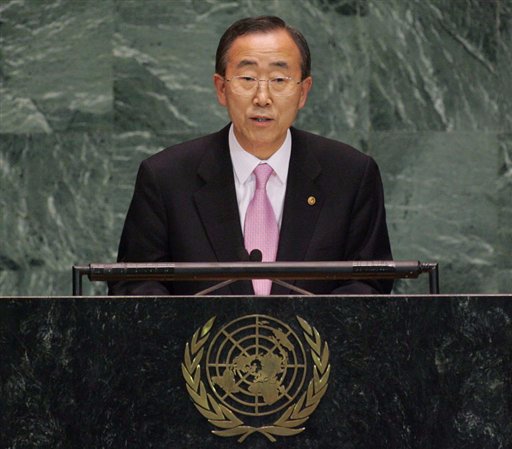 Speaking at the New Delhi Summit on Sustainable Development on 5 January, Ban called all countries to strive to reach a 'conclusive carbon emissions reduction deal' at the climate change conference in Copenhagen in December. The New Delhi summit, which is also being attended by UN Under-Secretary-General and UNEP Executive Director Achim Steiner, aims to lay the ground work for the key Copenhagen talks on cutting emissions.

During the meeting, UNEP will launch the new report Freshwater Under Threat: South Asia that shows that climate change is likely to lead to severe water shortages across all of South Asia's river basins.

'Failure to combat climate change will increase poverty and hardship. It will destabilize economies, breed insecurity in many countries and undermine our goals for sustainable development,' Ban said at the Summit. More >>>
Posted by Unknown at 6:33 PM