Even though tropical forests seem a long way away from most of us, they play a vital role in all our lives, every day.

In fact, rainforests are essential for the wellbeing of everyone, because they are the world’s natural air-conditioning and thermostat systems. They act as the cooling belt around the centre of our planet and they generate much of the rainfall that is essential around the world for producing food to meet the demands of our growing global population.

Rainforests are also undeniably linked to our ability to prevent catastrophic climate change, and that is why His Royal Highness The Prince of Wales established his Rainforests Project. Read More >>>

Global warming could be twice as bad as forecast

WASHINGTON, May 19 (Reuters) - Global warming's effects this century could be twice as extreme as estimated just six years ago, scientists reported on Tuesday.

Earth's median surface temperature could rise 9.3 degrees F (5.2 degrees C) by 2100, the scientists at the Massachusetts Institute of Technology found, compared to a 2003 study that projected a median temperature increase of 4.3 degrees F (2.4 degrees C).

The new study, published in the American Meteorological Society's Journal of Climate, said the difference in projection was due to improved economic modeling and newer economic data than in previous scenarios.

Earlier climate warming may also have been masked by the global cooling effect of 20th-century volcanoes and by the emission of soot, which can add to warming, the scientists said in a statement.

To reach their conclusions, the MIT team used computer simulations that took world economic activity as well as climate processes into account, they said in a statement. More >>>
Posted by Unknown at 9:58 PM

Climate Change Displacement Has Begun – but Hardly Anyone Has Noticed 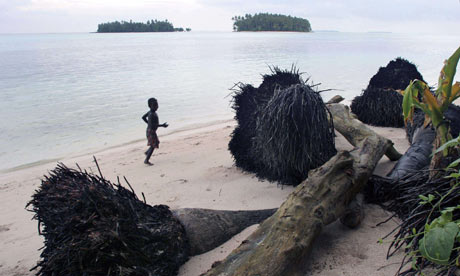 Friday, May 8, 2009 - The first evacuation of an entire community due to manmade global warming is happening on the Carteret Islands.

Journalists - they're never around when you want one. Two weeks ago a momentous event occurred: the beginning of the world's first evacuation of an entire people as a result of manmade global warming. It has been marked so far by one blog post for the Ecologist and an article in the Solomon Times*. Where is everyone?
The Carteret Islands are off the coast of Bougainville, which, in turn, is off the coast of Papua New Guinea. They are small coral atolls on which 2,600 people live. Though not for much longer.

As the Ecologist's blogger Dan Box witnessed, the first five families have moved to Bougainville to prepare the ground for full evacuation. There are compounding factors - the removal of mangrove forests and some local volcanic activity - but the main problem appears to be rising sea levels. More >>>
Posted by Unknown at 10:01 PM

The citizens and leaders of rich countries who aren't willing to ditch their SUVs and embrace other facets of a low-carbon lifestyle will sabotage attempts at reaching a global deal for tackling climate change, prominent British economist Lord Nicholas Stern is warning.

"This has to be the biggest international collaboration in history if we are to tackle this challenge," Stern told an audience of Toronto's business elite during a speech today at the Economic Club of Canada.

If we're not prepared to show developing countries such as China and India that we're serious about doing our part, he said, "then get a hat, some suntan lotion and write an apology letter to your grandchildren." More >>>
Posted by Unknown at 9:56 PM