The Confederation of British Industry placed global warming at the heart of its agenda as its annual conference began in London.

The CBI will address "urgent, concrete and measurable actions that UK business needs to take to address the risk of climate change," Martin Broughton, the group's president and British Airways chairman, said in a speech that opened the two-day conference.

On Monday, the CBI published a flagship report from its climate change task force, a high-level grouping of 18 chief executives and chairmen from top British companies. Read More 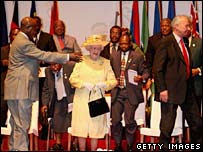 Leaders of Commonwealth states have drawn up an "action plan" to tackle climate change that falls short of any binding agreement.

The text, released after the second day of their summit in Uganda, is designed as a strong statement ahead of next month's UN climate talks.

But the 53-member group could not reach a consensus on binding emission cuts.

Meanwhile, India's Kamalesh Sharma has been appointed secretary general. He replaces New Zealand's Don McKinnon. Mr McKinnon is stepping down at the end of his four-year term.

On Saturday, the Commonwealth leaders are working at a retreat on Lake Victoria, away from media attention. Officials had said the summit would try to iron out differences between member states on climate change.

Many Commonwealth nations, led by Britain, wanted an influential statement before next month's UN talks in Bali, which will discuss a new agreement to replace the Kyoto protocol, which expires in 2012. But Canada had insisted that any statement should refer to the need for contributions from the world's major polluters, including the United States, which has so far resisted any binding targets. Read More 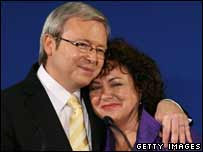 Mr Rudd said he would overturn a number of his predecessor's policies and sign the Kyoto Protocol and pull Australian troops out of Iraq.
He also promised to attend next month's UN climate change summit in Bali. Read More

PROVIDENCIALES, Turks and Caicos Islands: The closing session of the 2007 Conference on the Environment, held in the Turks and Caicos Islands (TCI), saw former vice president of the United States and recent Nobel Peace Prize Laureate, Al Gore, giving a presentation on climate change, and what small island nations can do to help offset its externalities.
The symposium was an historic occasion, the first such initiative to be undertaken in the Caribbean region. It drew discussions from expert panellists; speakers whose key focus is the environment, with the hope that further research not only be conducted, but also participants leave wanting to make the commitment and re-commit to climate change. Read More
Posted by Unknown at 5:15 PM

LONDON (Reuters) - The government is expected to publish its Climate Change Bill on Thursday, starting a parliamentary process that could lead to a legal limit on national carbon emissions within six months.

The bill sets a target of cutting national emissions of climate-warming carbon dioxide by 60 percent by 2050 and about half that by 2025. It would make Britain the first country to adopt such a legally-binding commitment.

"I expect the Bill to be published to parliament on Thursday," a government source said on Tuesday on condition of anonymity. The legislation will be fast-tracked. Read More 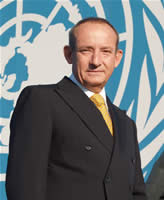 VALENCIA, Spain — The Nobel-winning panel of world climate experts on Monday launched a debate over a landmark report after a top U.N. official warned any failure to curb global warming would be "criminally irresponsible."

"Climate change will hit hardest the poorest and most vulnerable countries. Its overall effect, however, will be felt by everyone and will in some cases threaten people's very survival."
"Failing to recognize the urgency of this message and acting on it would be nothing less than criminally irresponsible," he said.

De Boer was speaking at the start of a meeting of the Intergovernmental Panel on Climate Change (IPCC). The U.N. forum of scientists, economists and other experts won this year's Nobel Peace Prize alongside climate campaigner and former U.S. Vice President Al Gore.
Read More
Posted by Unknown at 2:59 PM

United Nations Secretary General Ban Ki-moon has described his alarm at the pace of climate change after wrapping up a two-day fact-finding trip to southern Chile.

Mr Ban, who has vowed to make the fight against global warming a key issue during his tenure at the UN, went to Antarctica on Friday where he heard from scientists how rising temperatures have caused huge ice shelves to collapse into the sea.

He was the first head of the UN ever to visit the frozen continent.

On Saturday the secretary general visited the majestic mountains of the Torres del Paine national park, one of Chile's top tourist attractions.

He flew over the Grey glacier, the facade of which is covered in cracks, which experts blame on changes in the weather.

ECOLABELING: VOTING WITH OUR WALLETS

One instrument that can help in the environmental restructuring of the economy is ecolabeling. Labeling products that are produced with environmentally sound practices lets consumers vote with their wallets. Ecolabeling is now used to enable consumers to identify energy-efficient household appliances, forest products from sustainably managed forests, fishery products from sustainably managed fisheries, and “green” electricity from renewable sources.

Among these ecolabels are those awarded by the Marine Stewardship Council (MSC) for seafood. In March 2000, the MSC launched its fisheries certification program when it approved the Western Australia Rock Lobster fishery. Also earning approval that day was the West Thames Herring fishery. In September 2000, the Alaska salmon fishery became the first American fishery to be certified. Among the key players in the seafood processing and retail sectors supporting the MSC initiative were Europe-based Unilever, Youngs-Bluecrest, and Sainsbury’s. Read More
Posted by Unknown at 10:57 AM