2011: A Year of Weather Extremes, with More to Come

The global average temperature in 2011 was 14.52 degrees Celsius (58.14 degrees Fahrenheit). According to NASA scientists, this was the ninth warmest year in 132 years of recordkeeping, despite the cooling influence of the La Niña atmospheric and oceanic circulation pattern and relatively low solar irradiance. Since the 1970s, each subsequent decade has gotten hotter—and 9 of the 10 hottest years on record have occurred in the twenty-first century. 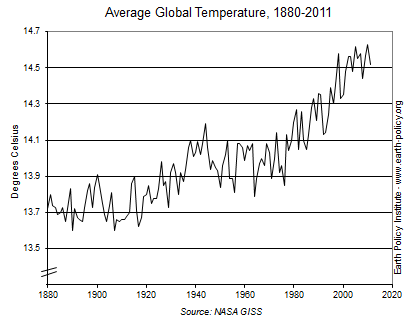 Each year’s average temperature is determined by a number of factors, including solar activity and the status of the El Niño/La Niña phenomenon. But heat-trapping gases that have accumulated in the atmosphere, largely from the burning of fossil fuels, have become a dominant force, pushing the Earth’s climate out of its normal range. The planet is now close to 0.8 degrees Celsius warmer than it was a century ago. Hidden within annual averages and expected variability are startling instances of new temperature and rainfall records in many parts of the world—weather extremes that would once be considered anomalies but that now risk becoming the new norm as the Earth heats up. More
Posted by Unknown at 12:29 PM

The verdict is in on climate change

Recently I had jury duty, and during jury selection something remarkable occurred. Early in the proceedings, the judge posed a hypothetical question to the 60 or so potential jurors in the room: "If I were to send you out now and ask you to render a verdict, what would it be? How many of you would vote not guilty?" A few raised their hands. "How many would vote guilty?" A few more raised their hands. "And how many would say you didn't know enough to decide?" Every remaining hand — about 50 people — went up immediately.

That, of course, was the wrong answer, and the judge proceeded to explain why. In the American system of justice, there is a presumption of innocence. Because no evidence had been presented, the state had not proved its case beyond a reasonable doubt, and we would have to render a verdict of not guilty. After her explanation, she posed the question again, and (except for a few who clung to guilty and were sent home) we all raised our hands for not guilty.

Jury duty was in some ways difficult, but in one respect, it was easy: We were given clear instructions by a recognized authority and we followed them. No one argued about who had the burden of proof. No one suggested that the judge was not an appropriate authority, or that we should reject her instructions. On the contrary, when the time came to deliberate, we referred on more than one occasion to her instructions, and when the time came to vote, we had little trouble reaching a unanimous verdict. Driving home, I found myself contrasting this with the issue on which I work in my professional life: climate change.

I study the history of climate science, and my research has shown that the think tanks and institutes that deny the reality or severity of climate change, or promote distrust of climate science, do so out of self-interest, ideological conviction or both. Some groups, like the fossil fuel industry, have an obvious self-interest in the continued use of fossil fuels. Others fear that if we accept the reality of climate change, we will be forced to acknowledge the failures of free-market capitalism. Still others worry that if we allow the government to intervene in the marketplace to stop climate change, it will lead to further expansion of government power that will threaten our broader freedoms. MoreNaomi Oreskes is a professor of history at UC San Diego and the coauthor of "Merchants of Doubt: How a Handful of Scientists Obscured the Truth on Issues from Tobacco Smoke to Global Warming."
Posted by Unknown at 8:33 AM

ScienceDaily (Jan. 19, 2012) — The global average surface temperature in 2011 was the ninth warmest since 1880, according to NASA scientists. The finding continues a trend in which nine of the 10 warmest years in the modern meteorological record have occurred since the year 2000.

"We know the planet is absorbing more energy than it is emitting," said GISS Director James E. Hansen. "So we are continuing to see a trend toward higher temperatures. Even with the cooling effects of a strong La Niña influence and low solar activity for the past several years, 2011 was one of the 10 warmest years on record."

The difference between 2011 and the warmest year in the GISS record (2010) is 0.22 degrees F (0.12 C). This underscores the emphasis scientists put on the long-term trend of global temperature rise. Because of the large natural variability of climate, scientists do not expect temperatures to rise consistently year after year. However, they do expect a continuing temperature rise over decades. More

In the battle against global warming, scientists say they some of the world’s largest emitters should adjust their focus from reducing emissions of carbon dioxide, to curbing the emissions of soot and methane.

NASA scientists, in a study published in Science, say that while carbon dioxide from fossil fuels like coal and oil remain a larger overall cause of global warming, reducing methane and soot may offer short-term solutions that could slow down the impacts of global warming.

The research, led by Drew Shindell of NASA’s Goddard Institute for Space Studies, finds that focusing on black carbon and methane measures could slow global mean warming 1 degree Fahrenheit by 2050, preventing between 700,000 and 4.7 million premature deaths each year.

While all regions of the world would benefit, countries in Asia and the Middle East would see the biggest health and agricultural gains from the emissions controls, said NASA officials.

The study, which was conducted under NASA, included an international team, which considered about 400 control measures. The new study focused on 14 measures with the greatest climate benefit. The study concludes that all 14 measures would curb the release of either black carbon or methane, pollutants that exacerbate climate change and damage human or plant health either directly or by leading to ozone formation. The new study builds upon research featured in an assessment report published last year by the United Nations Environment Program and the World Meteorological Organization.

The study also finds that hundreds of thousands of deaths would be prevented with such changes. Between 700,000 and 4.7 million premature deaths could be averted, say scientists. Black carbon, a product of burning fossil fuels or biomass such as wood or dung, is one of the leading causes of respiratory and cardiovascular diseases. The small particles also absorb radiation from the sun causing the atmosphere to warm and rainfall patterns to shift. In addition, they darken ice and snow, reducing their reflectivity and hastening global warming. Ways to cut back include building more efficient cookstoves, installing more filters on diesel vehicles, taking the worst polluting vehicles off the road and banning the practice of burning farmland, the study said.nRead more: http://www.thestatecolumn.com/science/in-fight-against-global-warming-nasa-scientists-call-for-reduction-of-black-carbon/#ixzz1jZAB89fH

Weird weather around the world sees in 2012

With unusual weather in Europe and the Americas, low Arctic ice, droughts in Africa and Latin America, 2012 picks up where 2011 left off.

2012 has begun where 2011 left off with weird weather in Europe and the Americas, Arctic ice at almost its lowest extent ever recorded in midwinter, disastrous droughts and searing heat in Africa and Latin America, and one of the world's biggest insurance companies warning that climate change will increase damages.Thousands of people in Austria, France and Germany were on Thursday still digging themselves out of some of the heaviest snowfalls seen in 30–50 years. After Europe's driest and warmest autumn for nearly 150 years, a massive storm dumped nearly 18ft of snow in two days this week, cutting off ski resorts and villages and leaving people and animals stranded. 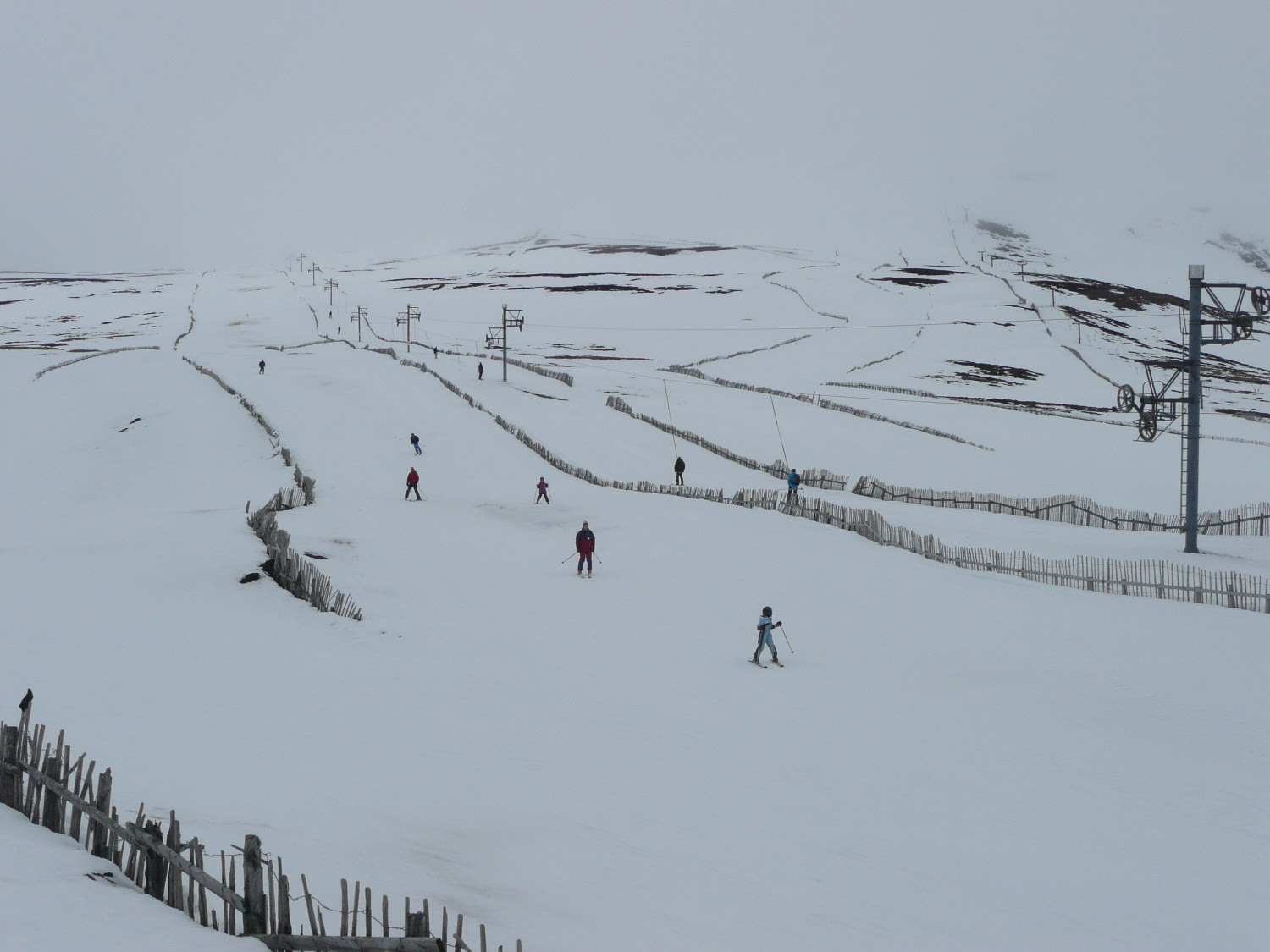 The summit of the 9,718ft Zugspitze mountain in Germany which had only 7.5 inches of snow a few weeks ago, now has 150 inches.However, Arctic sea ice has not fully reformed after last year's massive melt when it reached its second lowest extent ever recorded. It is now at its third lowest December extent recorded since records began 30 years ago, averaging 12.38m square kilometres (4.78 million square miles).More worryingly from a climate perspective, is data that shows its volume is now at it lowest ever recorded level at the start of a year.

According to the US government-funded Polar Science Centre at the University of Washington, the volume on 31 December was around 12,230 km3 – a massive 47% lower than the maximum in 1979, and 37% below the mean as depicted on this chart. More