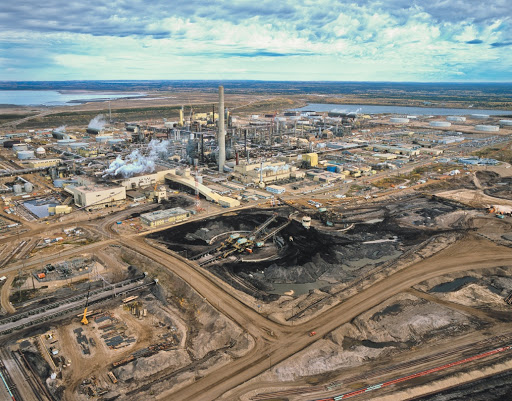 Above: plant owned by Syncrude, a joint venture of ExxonMobil’s Canadian subsidiary Imperial Oil, which processes oil from the tar sands of northern Alberta, Canada’s biggest source of carbon emissions and the US’s largest source of imported oil; photograph by Garth Lenz from his traveling exhibition ‘The True Cost of Oil’ In the first part of this article, we described recent reporting that ExxonMobil’s leaders knew humans were altering the world’s climate by burning fossil fuels even while the company was helping to fund and propel the movement denying the reality of climate change.1 Ever since the Los Angeles Times and InsideClimate News started publishing articles showing this in late 2015, ExxonMobil has repeatedly accused its critics of “cherry-picking” the evidence, taking its statements out of context, and “giving an incorrect impression about our corporation’s approach to climate change.”2 Meanwhile, New York Attorney General Eric Schneiderman is one of several officials who have been investigating whether the company’s failures to disclose the business risks of climate change to its shareholders constituted consumer or securities fraud.   Since ExxonMobil claims that it has been misrepresented, we encourage it to make public all the documents Schneiderman has demanded, so that independent researchers can consider all the facts. In the meantime we suggest that anyone who remains unconvinced by the record we have collected and published of the company’s internal statements confirming the reality of climate change consider its actions, especially its expenditures. Regardless of its campaign to confuse policymakers and the public, Exxon has always kept a clear eye on scientific reality when making business decisions.   In 1980, for example, Exxon paid $400 million for the rights to the Natuna natural gas field in the South China Sea. But company scientists soon realized that the field contained unusually high concentrations of carbon dioxide, and concluded in 1984 that extracting its gas would make it “the world’s largest point source emitter of CO2 [, which] raises concern for the possible incremental impact of Natuna on the CO2 greenhouse problem.” The company left Natuna undeveloped. Exxon’s John Woodward, who wrote an internal report on the field in 1981, told InsideClimate News, “They were being farsighted. They weren’t sure when CO2 controls would be required and how it would affect the economics of the project.”3   This, of course, was a responsible decision. But it indicates the distance between Exxon’s decades of public deception about climate change and its internal findings. So do investments that Exxon and its Canadian subsidiary Imperial Oil made in the Arctic. As Ken Croasdale, a senior ice researcher at Imperial, told an engineering conference in 1991, concentrations of greenhouse gases in the atmosphere were increasing “due to the burning of fossil fuels. Nobody disputes this fact.” Accordingly,   any major development with a life span of say 30–40 years will need to assess the impacts of potential global warming. This is particularly true of Arctic and offshore projects in Canada, where warming will clearly affect sea ice, icebergs, permafrost and sea levels.   Croasdale based these projections on the same climate models that Exxon’s leaders spent the next fifteen years publicly disparaging. But following his warnings that rising seas would threaten buildings on the coast, bigger waves would threaten offshore drilling platforms, and thawing permafrost would threaten pipelines, Exxon began reinforcing its Arctic infrastructure. Read More

a report by the Union of Concerned Scientists, January 2007
available at [ucsusa.org](http://ucsusa.org/)
Posted by Unknown at 10:05 AM

25 February 2016, London, UK
Six leaders and influencers from across the shipping industry will join global NGO Carbon War Room’s (CWR’s) Shipping Efficiency Advisory Board. Their backgrounds span the shipowning, chartering, technical analysis, finance, and academic worlds. The board will lend extensive industry insight and support CWR’s mission to profitably decarbonise the international shipping industry. Galen Hon, Manager, Shipping Efficiency, Carbon War Room, commented:
"We are thrilled to have gathered a group with so much knowledge and experience in shipping. Following UNFCCC in Paris, the industry has an obligation to find new and innovative ways to reduce carbon while remaining competitive. With expertise spanning finance, ship operation, classification, data analysis, technology, and software, these individuals are perfectly positioned to identify and evaluate opportunities for innovation and growth.
“The calibre of the board reflects the credibility that CWR has garnered within the shipping industry. It’s a validation of our ongoing efforts to work directly with the industry to deliver paths to carbon reduction in ways that make good business sense.” More
Posted by Unknown at 8:35 PM