Cuba Cooperates with Seychelles on Hazards of Sea-level Rise

Victoria, Mar 26 (Prensa Latina) Seychelles' President James Michel welcomed a team of Cuban scientists that concluded the first phase of a study on the hazards of sea-level rise and coastal flooding in this island nation of the Indian Ocean.

Headed by Juana Serrano, the group of Cuban experts presented the results of the first stage of the project to President Michel, and discussed with him some preliminary ideas on the outcome of the second phase.

Present at the meeting on Friday at State House were Minister for Home Affairs, Environment, Transport and Energy Joel Morgan, director-general of the Climate and Environmental Services Division Wills Agricole, and Cuban ambassador to Seychelles Maria Aida Nogales.

Work on the one-year project started in September last year, and the Cuban team has been in the country since late February to carry out the next stage, recalled Seychelles Nation newspaper. More >>>
Posted by Unknown at 9:51 AM

Power has finally been restored to all the reactors at Fukushima Daiichi nuclear power plant in Japan, nearly two weeks after the facility was ravaged by a 30-foot tsunami, giving Japanese officials new hope they can keep the crisis from spinning further out of control.
With some of the immediate danger of a complete meltdown on hold and much hazardous work remaining, authorities are only starting to investigate exactly what happened, and what extra safety features might have prevented the disaster.
They’re not the only ones. In many parts of the world, including the United States, nuclear reactors are often located near the ocean, due to their requirement for abundant supplies of water for cooling purposes. And while tsunamis aren’t a threat everywhere, the sea can pose other challenges. Hurricanes, for example, can push walls of water ahead of them, like the storm surge that did most of the damage to New Orleans when Hurricane Katrina swept through in 2005. In fact, one U.S. nuclear plant has already been dealt a direct hit by a severe hurricane. In 1992, when Category 5 Hurricane Andrew hammered the Turkey Point power plant in southern Miami-Dade County, Fla., its nuclear reactors were unharmed despite extensive damage to other parts of the facility. More >>>
Posted by Unknown at 11:14 AM

Lord Stern is chair of the School’s Grantham Research Institute of Climate Change and the Environment, and author of the Stern Review on Climate Change. He opened the lecture by outlining the magnitude of climate change, which he cited as one of the defining problems facing our generation.

“High carbon growth is not a serious option”, he argued, as “business as usual will create a situation so horrible that it will halt and reverse human development”.

Michael Jacobs and Gerard Lyons also spoke at the event. Jacobs, a visiting professor at the LSE, reinforced Stern’s statement, saying, “the evidence for climate change is now pretty unequivocal” and “there is absolutely no question given the impact of climate change that we have to go down the low carbon path”.
Both Stern and Jacobs said politics of this issue are unavoidable, which Stern said is problematic given governments tend to be more concerned with getting reelected than making difficult choices regarding the environment. More >>> 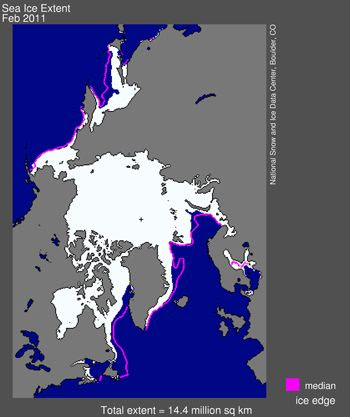 The sea ice extent was below average in both the Atlantic and Pacific sectors, especially in theLabrador Sea and the Gulf of St. Lawrence, according to the monthly update from the National Snow and Ice Data Center. More >>>
Posted by Unknown at 1:35 PM