The Sahara desert is expanding thanks to climate change 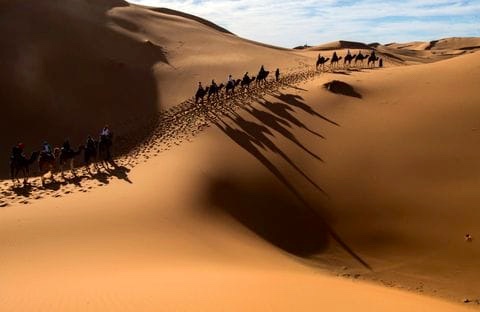 Earth’s largest hot desert, the Sahara, is getting bigger, a new study finds. It is advancing south into more tropical terrain in Sudan and Chad, turning green vegetation dry and soil once used for farming into barren ground in areas that can least afford to lose it.

Yet it is not just the spread of the Sahara that is frightening, the researchers say. It’s the timing: It is happening during the African summer, when there is usually more rain. But the precipitation has dried up, allowing the boundaries of the desert to expand.

“If you have a hurricane come suddenly, it gets all the attention from the government and communities galvanize,” said Sumant Nigam, a professor of atmospheric and oceanic science at the University of Maryland and the senior author of the study. “The desert advance over a long period might capture many countries unawares. It’s not announced like a hurricane. It’s sort of creeping up on you.”

The study was published Thursday in the Journal of Climate. The authors said that although their research focused only on the Sahara, it suggests that climate changes also could be causing other hot deserts to expand — with potentially harsh economic and human consequences.

Deserts form in subtropical regions because of a global weather circulation called the Hadley cell. Warm air rises in the tropics near the equator, producing rain and thunderstorms. When the air hits the top of the atmosphere, it spreads north and south toward the poles. It does not sink back down until it is over the subtropics, but as it does, the air warms and dries out, creating deserts and other areas that are nearly devoid of rain. Read More 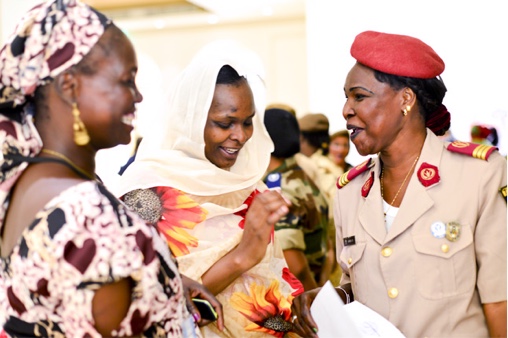 Climate is unquestionably linked to armed conflict,” said Halvard Buhaug, a professor at the Peace Research Institute Oslo and the Norwegian University of Science and Technology, at a recent Wilson Center event marking the end of the three-year Climate Anomalies and Violent Environments (CAVE) research project. But, he stresses that under a changing climate, exactly how and through what pathways is still a subject of much debate in the academic community.

At the same time, practitioners working in fragile states need concrete guidance in order to prevent conflict and improve adaptation. “Conflict is an important cause of vulnerability to climatic changes,” said Buhaug. “Conflict mitigation…is probably the most important thing we can do to reduce environmental vulnerability.”

Climatic changes can increase the risk of conflict under certain conditions and through certain causal pathways, said Buhaug, citing some common drivers: a history of violence, low levels of development, poor governance, and inequality. In addition, the evidence shows that “climatic changes can affect the dynamics of conflict,” including the conflict’s duration, severity, and likelihood of ending quickly. But there is much less consensus that such changes could cause an outbreak of armed conflict. Read More

Bomb Cyclones, Nor’easters, and the Messy Relationship Between Weather and Climate 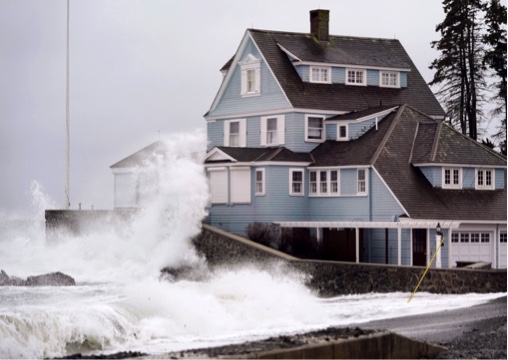 After three frigid nor’easters in less than two weeks, even the most devout prophet of climate change could be forgiven for echoing the sentiment that President Trump tweeted a few months ago, to much ridicule, shortly before one of the coldest New Year’s Eves on record: “Perhaps we could use a little bit of that good old Global Warming.” By this point, most people outside the White House understand that climate is not the same as weather—that climate is the forest and weather is the trees. Yet the global climate system is enormously complex, and there is, in fact, a lively scientific debate in progress about the relationship between human-caused climate change (especially in the Arctic) and the increased frequency of extreme cold-weather events across the United States—blizzards, bomb cyclones, and the dreaded wintry mix.

The debate began in late 2011, at a meeting in San Francisco of the American Geophysical Union, when an atmospheric scientist named Jennifer Francis gave a talk that electrified her colleagues. Perhaps, she suggested, the persistent outbreaks of extreme weather that people were experiencing in the Northern Hemisphere were connected to the colossal loss of sea ice in the Arctic—a region that, with increasing greenhouse-gas emissions, has warmed at double the rate of the rest of the planet. Up until that moment, while scientists knew that the Arctic was changing rapidly—since the nineteen-seventies, sea ice, snow cover, and glaciers had all declined dramatically, and the permafrost was starting to thaw—they did not think it had an influence on weather systems in the midlatitudes. Credit for that went entirely to the tropics. Read More

February 13 2018 - The rate of global sea level rise has been accelerating in recent decades, rather than increasing steadily, according to a new study based on 25 years of NASA and European satellite data. 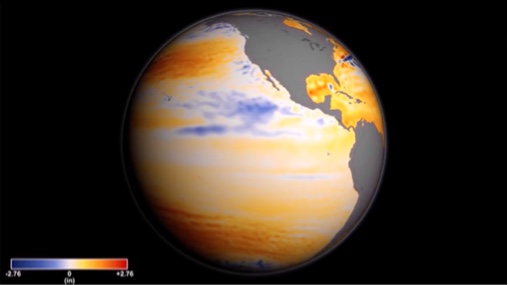 This acceleration, driven mainly by increased melting in Greenland and Antarctica, has the potential to double the total sea level rise projected by 2100 when compared to projections that assume a constant rate of sea level rise, according to lead author Steve Nerem. Nerem is a professor of Aerospace Engineering Sciences at the University of Colorado Boulder, a fellow at Colorado's Cooperative Institute for Research in Environmental Sciences (CIRES), and a member of NASA's Sea Level Change team.

Global sea level rise is accelerating incrementally over time rather than increasing at a steady rate, as previously thought, according to a new study based on 25 years of NASA and European satellite data.

If the rate of ocean rise continues to change at this pace, sea level will rise 26 inches (65 centimeters) by 2100 — enough to cause significant problems for coastal cities, according to the new assessment by Nerem and colleagues from NASA's Goddard Space Flight Center in Greenbelt, Maryland; CU Boulder; the University of South Florida in Tampa; and Old Dominion University in Norfolk, Virginia. The team, driven to understand and better predict Earth's response to a warming world, published their work Feb. 12 in the journal Proceedings of the National Academy of Sciences.

"This is almost certainly a conservative estimate," Nerem said. "Our extrapolation assumes that sea level continues to change in the future as it has over the last 25 years. Given the large changes we are seeing in the ice sheets today, that's not likely."

Rising concentrations of greenhouse gases in Earth's atmosphere increase the temperature of air and water, which causes sea level to rise in two ways. First, warmer water expands, and this "thermal expansion" of the ocean has contributed about half of the 2.8 inches (7 centimeters) of global mean sea level rise we've seen over the last 25 years, Nerem said. Second, melting land ice flows into the ocean, also increasing sea level across the globe. Read More

A new report is out on how the US economy is rigged against the poor. Via TomDispatch 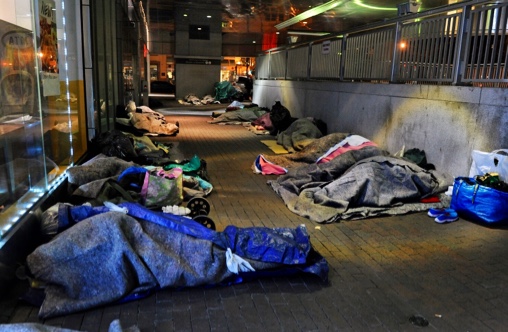 "The 2018 Prosperity Now Scorecard and its report, Whose Bad Choices? How Policy Precludes Prosperity and What We Can Do About It, also make the argument that the U.S. economic system and policies of the Trump administration and Congress are stacked against people of color.

Criminalize poverty and start a revolution

“'We’ve heard more rhetoric lately about [low-income] people making ‘bad choices’ or being ‘irresponsible with money’ and that’s been the direction policy has been going,’ said Kasey Wiedrich, director of applied research at Prosperity Now. 'We wanted to attack that.' One example of the rhetoric: Sen. Chuck Grassley (R-Iowa) recently said lower-income Americans 'are just spending every darn penny they have whether it’s on booze or women or movies.'

"In reality, however, the Prosperity Now report said, 'the dominant narrative about low-wealth people is nothing but a series of myths.' Poor choices, the analysts there say, aren’t why people are poor." https://goo.gl/WkU7AJ

In 2009 a team of Engineering Students from Michigan State University traveled to a workshop organized by the Appropriate Technology Collaborative in Quetzaltenango, Guatemala. Their task: a refrigerator that can be built from locally available materials almost anywhere and run without power.

Design an adsorption refrigerator capable of maintaining a temperature between 2°C and 8°C that utilizes passive solar energy and can be built in developing countries. The team’s final product will be a clear and comprehensive set of instructions for building the device.
The students built a vaccine refrigerator that does not use electricity. It does not have any moving parts. You simply place it in the sun and it chills or freezes things.

This very remarkable machine runs on pyrolytic carbon. The char does not need to be food grade, as for biochar or activated carbon. It stays inside a closed loop. It could be cascade carbon from a variety of feedstocks. Its essential service is evaporative cooling. The total cost for the prototype was $917.39. Estimated worker cooperative production cost at the scale of three per month, including labor, would be under $300. Their report reads:
Based on the design decision matrices, a solar-powered adsorption refrigerator was selected for the design of the vaccine refrigerator. This refrigerator has no moving parts aside from a few valves. It uses no toxic materials, generally available materials, and should be simple to build and operate. The refrigerator has an intermittent cycle. It will “charge” during the day and remove heat from a cooling volume at night.