The Climate War Room, an initiative of The Cayman Institute is committed to using a .eco domain, which is a new web address ending for anyone committed to positive change for the planet.

.eco is a new web address ending—known as a top-level domain—for anyone committed to positive change for the planet. .eco web addresses are available to any business, government, non-profit or individual working toward a sustainable future.

The .eco domain is backed by more than 50 environmental organizations including Conservation International, United Nations Global Compact and WWF and is a trusted symbol for the environmental community. www.climatewarroom.org

Towards a livable future

Humans have influenced nature since as early as the Ice Age, and over the past century our impact has become even greater with our many new technologies and a growing world population. Leiden researchers study this impact and how we can keep it within reasonable limits so that nature can be preserved. We cannot do without nature: we need it for our food and for raw materials, as well as for relaxation.

Human and nature: a complex relationship

Humans were probably already deliberately burning down forest areas at the end of the Ice Age, in order to create a more variable landscape. Since then the world population has grown exponentially, and will continue to do so, which means that man's impact on the planet will also increase. Natural systems and cycles are becoming disrupted leading to such problems as pollution, depletion of resources and climate change. There is evidence that biodiversity plays a major role in stable ecosystems, and, besides this, nature is a valuable asset for humans because of the peace and relaxation that it can offer. The way we use the planet does not always reflect our desire to create -- and maintain -- a healthy living environment. In Leiden researchers investigate how we can bridge this gap and how we can provide a good life for ourselves without harming the planet and future generations.

What works for us?

Leiden researchers from different disciplines conduct research on nature and biodiversity, investigating such questions as what man's impact is in farmland areas, for instance. 'The Netherlands is a small country with a super-intensive agrarian culture,' Gert de Snoo explains. De Snoo, Professor of Conservation Biology, and his colleagues discovered that maintaining small areas of nature on farmland, such as wild flowers along the borders of fields, can have a positive effect on biodiversity. Ecotoxicologists conduct research on the effects of biodiversity, exploring the influence of pesticides on local biodiversity. We can also learn from the past. Archaeologists study how man influenced his living environment in the past and what the consequences were. This could be something like the erosion of areas of loess in South Limburg, a process that was started by the Romans, but that only in the 20th century led to extensive mudslides, making the land permanently unsuitable for agriculture. All these insights generate knowledge about how we can best approach our need for food while at the same time preserving the planet.

Don't exhaust nature: use it wisely

We all want so much today: we want to live in nice houses, fly all over the world and have the newest and best smartphones. All this is possible, but at the same time we are exhausting the planet because all these products and services need raw materials. Over the years Leiden has collected enormous amounts of data on raw material supplies. How do physical flows of raw materials move across the world? Where can they be found? Leiden has the world's biggest database on this issue, which makes it possible for our researchers to chart the metabolism of society. This offers insights into the best ways of using and reusing sustainable materials so we are better able to create a circular economy. 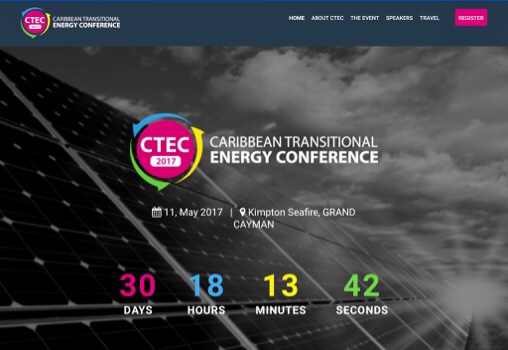 WHY CAYMAN? WHY NOW?

Caribbean economies suffer from some of the highest electricity prices in the world. Despite their abundance of renewable energy sources, Cayman has a relatively low level of renewable energy penetration; the economy continues to spend a large proportion of its GDP on imported fossil fuels.

The Caribbean Transitional Energy Conference (CTEC) is about building our resilience as a small nation, about diversifying our energy sector and the way that we do business.

It is about ensuring sustainable social and economic growth through strong leadership, recognising the threat of climate change and the vulnerability of islands across the world and voicing our commitment to take the measures that we can take now. More