This is what Global Warming looks like from NRDC Broadcast Videos on Vimeo.

Solar Production Climbs To Another Record In 2009 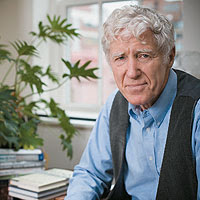 Solar photovoltaic (PV) cell manufacturers produced a record 10,700 megawatts of PV cells globally in 2009—an impressive 51-percent increase from the year before.
While growth in 2009 slowed from the remarkable 89-percent expansion in 2008, it continued the rapid rise of an industry that first reached 1,000 megawatts of production in 2004. By the end of 2009, nearly 23,000 megawatts of PV had been installed worldwide, enough to power 4.6 million U.S. homes. Solar PV, the world's fastest-growing power technology, now generates electricity in more than 100 countries. More >>>
Posted by Unknown at 12:21 PM

My Road Trip With a Solar Rock Star
Or Notes on the Enthusiasm Gap
By Bill McKibben
I got to see the now-famous enthusiasm gap up close and personal last week, and it wasn’t a pretty sight.

The backstory: I help run a global warming campaign called 350.org.  In mid-summer, we decided to organize an effort to ask world leaders to put solar panels on the roofs of their residences. It was to be part of the lead-up to a gigantic Global Work Party on October 10th (10-10-10), and a way to give prime ministers and politburos something easy to do in the hope of getting the fight against global warming slowly back on track. One of those crucial leaders is, of course, Barack Obama, who stood by with his arms folded this summer while the Senate punted on climate-change legislation.  We thought this might be a good way for him to signal that he was still committed to change, even though he hadn’t managed to pass new laws.
And so we tracked down the solar panels that once had graced the White House roof, way back in the 1970s under Jimmy Carter. After Ronald Reagan took them down, they’d spent the last few decades on the cafeteria roof atUnity College in rural Maine.  That college’s president, Mitch Thomashow, immediately offered us a panel to take back to the White House. Better still, he encouraged three of his students to accompany the panel, not to mention allowing the college’s sustainability coordinators to help manage the trip.
And so, on the day after Labor Day, we set off in a biodiesel college van. Solar road trip!  Guitars, iPods, excellent snack food, and for company, the rock star of solar panels, all 6 x 3-feet and 140 pounds of her. We pulled into Boston that first night for a rally at Old South Church, where a raucous crowd lined up for the chance to sign the front of the panel, which quickly turned into a giant glass petition. The same thing the next night in New York, and then DC, with an evening at one of the city’s oldest churches headlined by the Reverend Lennox Yearwood, head of the Hip-Hop Caucus.
It couldn’t have been more fun. Wherever we could, we’d fire up the panel, pour a gallon of water in the top, point it toward the sun, and eight or nine minutes later you’d have steaming hot water coming out the bottom. Thirty-one years old and it worked like a charm -- a vexing reminder that we’ve known how to do this stuff for decades. We just haven’t done it.
That’s what we kept telling reporters as they turned out along the route: if the Obamas will put solar panels back on the White House roof, or on the lawn, or anywhere else where people can see them, it will help get the message across -- the same way that seed sales climbed 30% across the country in the year after Michelle planted her garden.
There was just one nagging concern as we headed south.  We still hadn’t heard anything conclusive from the White House. We’d asked them -- for two months -- if they’d accept the old panel as a historical relic returned home, and if they’d commit to installing new ones soon.  We’d even found a company, Sungevity, that was eager to provide them free.  Indeed, as word of our trip spread, other solar companies kept making the same offer.  Still, the White House never really responded, not until Thursday evening around six p.m. when they suddenly agreed to a meeting at nine the next morning.
As you might imagine, we were waiting at the “Southwest Appointment Gate” at 8:45, and eventually someone from the Office of Public Engagement emerged to escort us inside the Executive Office Building. He seated us in what he called “the War Room,” an ornate and massive chamber with a polished table in the middle.
Every window blind was closed.  It was a mahogany cave in which we could just make out two environmental bureaucrats sitting at the far end of the table. I won’t mention their names, on the theory that what followed wasn’t really their idea, but orders they were following from someone else. Because what followed was… uncool.

Bill McKibben is the founder of 350.org and author most recently of Eaarth: Making a Life on a Tough New Planet. He is a scholar in residence at Middlebury College.
Copyright 2010 Bill McKibben