The Known Universe: A perspective from which to reflect on climate change 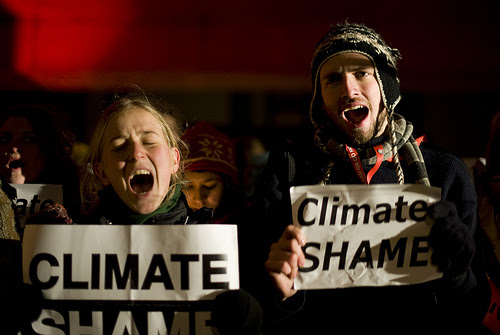 Climate Shame: Saturday Dec 19th, 2009 - Climate negotiations in Copenhagen ended with a whimper and some chaos in the final plenary.

About 115 national leaders attended the Copenhagen climate talks but the final 'agreement' announced by the US, India, China and South Africa, was drafted far outside the consensus process of the United Nations and amounted to only aspirational targets and promises, falling far short of an ambitous, fair and binding treaty demanded by civil society.

"The conference of the parties takes note of the Copenhagen Accord," said a final decision announced by Danish Prime Minister Rasmussen. But Tuvalu declared the COP15 process completely undemocratic, conducted in closed door sessions, and slamed the target of 2 degrees for failing to be sufficient to ensure their survival. "We are being offered 30 pieces of silver to betray our children. Our future is not for sale." Venezuela, Bolivia, Cuba and Costa Rica also raised their voices that the proposal cannot be considered as the work of COP according to Copenhagen End Game of the It's Getting Hot in Here Blog of the Youth Climate Movement.
More >>>
Posted by Unknown at 1:00 PM 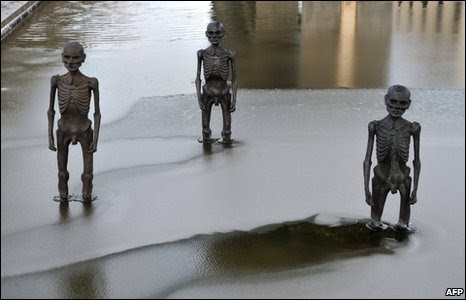 A deal appears to be in sight for the final day of the UN climate change talks, but there are fears it may not prevent a 3C (5.4F) temperature rise.

Both the US and China, the two largest emitters of greenhouse gases, have indicated they may make concessions.

It is hoped these may help overcome sharp divisions at the two-week talks.

China signalled concessions on the monitoring of emission curbs while the US said it would commit money for developing countries.

Low-lying island nations demand dramatic action on climate change. The big boys shrug. If I were to guess which group of people currently living on the planet cared least about the ClimateGate hacked e-mail controversy, I'd bet on the citizens of the Alliance of Small Island States.
Members of the Alliance --- a group of about 45 islands and other low-lying nations -- take rising sea levels a bit more seriously than your average think tank funded by Exxon. Their very existence is threatened, and they are making a stink about it at the climate change talks in Copenhagen.
A study published this week in the Proceedings of the National Academy of Sciences contends that global sea levels may rise almost two meters by the end of this century, faster than predicted by the International Panel on Climate Change. More >>>

'Fourteen days to seal history's judgment on this generation'

Today 56 newspapers in 45 countries take the unprecedented step of speaking with one voice through a common editorial. We do so because humanity faces a profound emergency.

Unless we combine to take decisive action, climate change will ravage our planet, and with it our prosperity and security. The dangers have been becoming apparent for a generation. Now the facts have started to speak: 11 of the past 14 years have been the warmest on record, the Arctic ice-cap is melting and last year's inflamed oil and food prices provide a foretaste of future havoc. In scientific journals the question is no longer whether humans are to blame, but how little time we have got left to limit the damage. Yet so far the world's response has been feeble and half-hearted. More >>>

“You know that with a sea-level rise of over 1.5 metres, hundreds of millions of people would be dead. They would simply be wiped out,” President Mohamed Nasheed of the Republic of Maldives told the UN Chronicle just two days after he addressed other world leaders at the 2009 UN General Assembly Summit on Climate Change.

The threat posed by rising sea levels has been the centrepiece of climate change negotiations, the main issue emphasized by Small Island Developing States, also known as the SIDS. More >>>
Posted by Unknown at 4:12 AM

PARIS — Quickening ice loss in West Antarctica will likely contribute heavily to a projected sea level rise of up to 1.4 metres (4.5 feet) by 2100, according to a major scientific report released Tuesday.

Scientists long held that most of Antarctica's continent-sized ice sheet was highly resistant to global warming, and that the more vulnerable West Antarctic ice block would remain intact for thousands of years to come.

The Intergovernmental Panel on Climate Change (IPCC) -- whose 2007 report is the scientific benchmark for the UN December 7-18 Copenhagen climate summit -- did not even factor melting ice sheets into its forecasts for rising seas.

But studies since then show huge loss of ice mass, mainly as a result of warmer ocean temperatures, according to the review by more than 100 experts on the Scientific Committee on Antarctic Research. More >>>