For most of the 20th century, Chesapeake Beach, Maryland, was known for its boardwalk, amusement park and wide, sandy beaches, popular with daytrippers from Washington, D.C.

“The bathing beach has a frontage of three miles,” boasted a tourist brochure from about 1900, “and is equal, if not superior, to any beach on the Atlantic Coast.”Today, on a cloudless spring afternoon, the resort town’s sweeping view of Chesapeake Bay is no less stunning. But there’s no longer any beach in Chesapeake Beach.
Where there once was sand, water now laps against a seven-foot-high wall of boulders protecting a strip of pricey homes marked with “No Trespassing” signs.Surveying the armored shoreline, Jim Titus explains how the natural sinking of the shoreline and slow but steady sea-level rise, mostly due to climate change, have driven the bay’s water more than a foot higher over the past century. Reinforcing the eroding shore with a sea wall held the water back, but it also choked off the natural supply of sand that had replenished the beach. What sand remained gradually sank beneath the rising water.

Bless Bolivia for Recharging the Fight to Rescue Our Climate 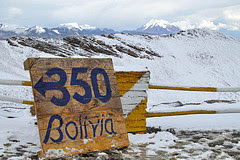 In a week when the American president has decided our energy policy should involve lots more offshore oil drilling, it's easy to despair--it doesn't look like it's going to be much of an Earth Day in the U.S. this April.

But maybe we'll get a jolt of political energy from the south, courtesy of the groups and leaders assembling from across the world in Cochabamba, Bolivia. This People's Summit on Climate Change will be seen as naive by precisely the kind of people applauding the president for turning on the oil spigots today--after all, its by definition a People's Summit, free from the kind of corporate interference that helped sink the Copenhagen conference in December (Bolivia's Supreme Court having not yet decided that corporations are people). More >>>