It was only a single, withered conifer needle, but it told a dramatic story of climate change. Glaciologists found it in a set of ice cores drilled through a glacier on top of Mount Ortles, in the Italian Alps. 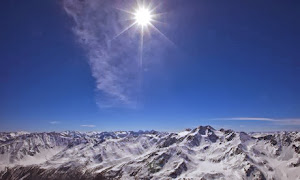 It lay about 80 metres below the glacial surface, encased in solid ice, and carbon dating confirmed that it had blown from the branches of Larix decidua, the European larch, 2,600 years earlier.

It was found about 30 kms from a far more dramatic exposure: the body of Ötzi the Iceman, a mummified bronze age corpse revealed by a melting glacier in 1991.

Both finds deliver the same uncompromising message: for at least 5,000 years – because Ötzi perished around that time – the Italian Alps had continued to stay frozen throughout the year.

And now they are melting. Or, to put it the scientific way, in the words of Paolo Gabrielli, of Ohio State University, who led the project: "Our first results indicate that the current atmospheric warming at high elevation in the Alps is outside the normal cold range held for millennia. This is consistent with the rapid, ongoing shrinking of glaciers at high elevation in this area."

The problem for all climate scientists – and for glaciologists in particular – is that direct measurements are relatively recent: the oldest thermometer readings date back little more than three centuries, and consistent world coverage began only in the 20th century.

Since climates undergo natural cycles of change on a scale of centuries, measurements over a short period are not, in themselves, of much use. Glaciers, in particular, are a problem: retreat or advance would have been imperceptible to the small populations likely ever to have observed them.

Visual records – paintings dating from the early 19th century, in most cases – indicate that today's glaciers are in retreat, but romantic age painters weren't particularly interested in climate or precision topography, so the evidence from paintings is limited.

But direct measurement of surviving ice really can tell a story, and Gabrielli's team produced a fragment of this narrative in San Francisco at a meeting of the American Geophysical Union.

The Alps are warming at twice the global rate, and the glaciers are everywhere in retreat. Alto dell'Ortles is the highest glacier in the eastern Alps, at 3,900 metres: its ice is likely to hold much more evidence of climate change and human impact.

As they drilled into the glacier, the research scientists from six nations found that the first 30 metre layer was composed of grainy compacted snow that had partly melted. Below that was nothing but solid, enduring ice all the way down to frozen bedrock. More