The Irony of climate

The Irony of Climate | Worldwatch Institute 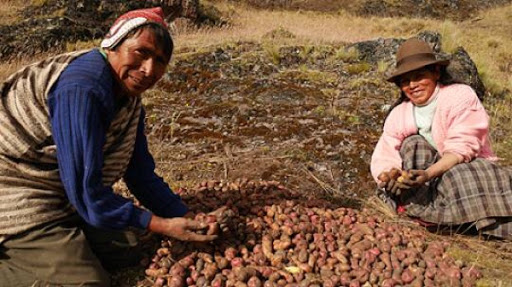 Archaeologists suspect that a shift in the planet's climate thousands of years ago gave birth to agriculture. Now climate change could spell the end of farming as we know it.   High in the Peruvian Andes, a new disease has invaded the potato fields in the town of Chac­llabamba. Warmer and wetter weather associated with global climate change has allowed late blight-the same fungus that caused the Irish potato famine-to creep 4,000 meters up the mountainside for the first time since humans started growing potatoes here thousands of years ago. In 2003, Chacllabamba farmers saw their crop of native potatoes almost totally destroyed. Breeders are rushing to develop tubers resistant to the "new" disease that retain the taste, texture, and quality preferred by Andean populations.   Meanwhile, old-timers in Holmes County, Kansas, have been struggling to tell which way the wind is blowing, so to speak. On the one hand, the summers and winters are both warmer, which means less snow and less snowmelt in the spring and less water stored in the fields. On the other hand, there's more rain, but it's falling in the early spring, rather than during the summer growing season. So the crops might be parched when they need water most. According to state climatologists, it's too early to say exactly how these changes will play out-if farmers will be able to push their corn and wheat fields onto formerly barren land or if the higher temperatures will help once again to turn the grain fields of Kansas into a dust bowl. Whatever happens, it's going to surprise the current generation of farmers.   Asian farmers, too, are facing their own climate-related problems. In the unirrigated rice paddies and wheat fields of Asia, the annual monsoon can make or break millions of lives. Yet the reliability of the monsoon is increasingly in doubt. For instance, El Niño events (the cyclical warming of surface waters in the eastern Pacific Ocean) often correspond with weaker monsoons, and El Niños will likely increase with global warming. During the El Niño-induced drought in 1997, Indonesian rice farmers pumped water from swamps close to their fields, but food losses were still high: 55 percent for dryland maize and 41 percent for wetland maize, 34 percent for wetland rice, and 19 percent for cassava. The 1997 drought was followed by a particularly wet winter that delayed planting for two months in many areas and triggered heavy locust and rat infestations. According to Bambang Irawan of the Indonesian Center for Agricultural Socio-Economic Research and Development, in Bogor, this succession of poor harvests forced many families to eat less rice and turn to the less nutritious alternative of dried cassava. Some farmers sold off their jewelry and livestock, worked off the farm, or borrowed money to purchase rice, Irawan says. The prospects are for more of the same: "If we get a substantial global warming, there is no doubt in my mind that there will be serious changes to the  monsoon," says David Rhind, a senior climate researcher with NASA's Goddard Institute for Space Studies.   Archaeologists believe that the shift to a warmer, wetter, and more stable climate at the end of the last ice age was key for humanity's successful foray into food production. Yet, from the American breadbasket to the North China Plain to the fields of southern Africa, farmers and climate scientists are finding that generations-old patterns of rainfall and temperature are shifting. Farming may be the human endeavor most dependent on a stable climate-and the industry that will struggle most to cope with more erratic weather, severe storms, and shifts in growing season lengths. While some optimists are predicting longer growing seasons and more abundant harvests as the climate warms, farmers are mostly reaping surprises.   Toward the Unknown (Climate) Region   For two decades, Hartwell Allen, a researcher with the University of Florida in Gainesville and the U.S. Department of Agriculture, has been growing rice, soybeans, and peanuts in plastic, greenhouse-like growth chambers that allow him to play God. He can control-"rather precisely"-the temperature, humidity, and levels of atmospheric carbon. "We grow the plants under a daily maximum/minimum cyclic temperature that would mimic the real world cycle," Allen says. His lab has tried regimes of 28 degrees C day/18 degrees C night, 32/22, 36/26, 40/30, and 44/34. "We ran one experiment to 48/38, and got very few surviving plants," he says. Allen found that while a doubling of carbon dioxide and a slightly increased temperature stimulate seeds to germinate and the plants to grow larger and lusher, the higher temperatures are deadly when the plant starts producing pollen. Every stage of the process-pollen transfer, the growth of the tube that links the pollen to the seed, the viability of the pollen itself-is highly sensitive. "It's all or nothing, if pollination isn't successful," Allen notes. At temperatures above 36 degrees C during pollination, peanut yields dropped about six percent per degree of temperature increase. Allen is particularly concerned about the implications for places like India and West Africa, where peanuts are a dietary staple and temperatures during the growing season are already well above 32 degrees C: "In these regions the crops are mostly rain-fed. If global warming also leads to drought in these areas, yields could be even lower." More
Posted by Unknown at 5:32 PM