What are the inter-linkages between climate change, disaster risk, and the urban poor? 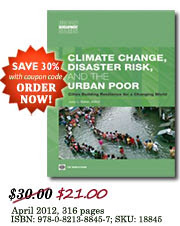 As some 70 million people in the developing world move to urban areas each year, cities are increasingly stretched to provide urban infrastructure, services, and safe land. One billion people already live in slums, and this is projected to double by 2030.

Further exacerbating this challenge are the risks associated with climate-related natural hazards. Cities are particularly vulnerable due to the high concentration of people and economic assets, and in many cases, their hazard-prone locations in coastal areas, along rivers, and in seismic zones. Risks are especially high in low- and middle-income countries where a third to one-half of the population in cities lives in slums. Rising sea levels, storm surges, earthquakes, floods and droughts have enormous impacts in urban areas and are likely to intensify over time. More