Crazy Weather to America: Get It Yet?

After a year with a record number of multi-billion dollar weather disasters, seven in 10 Americans now believe that "global warming is affecting the weather." 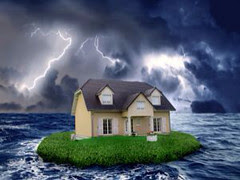 The Williams River was so languid and lovely last Saturday morning that it was almost impossible to imagine the violence with which it must have been running on August 28, 2011. And yet the evidence was all around: sand piled high on its banks, trees still scattered as if by a giant's fist, and most obvious of all, a utilitarian temporary bridge where for 140 years a graceful covered bridge had spanned the water.

The YouTube video of that bridge crashing into the raging river was Vermont's iconic image from its worst disaster in memory, the record flooding that followed Hurricane Irene's rampage through the state in August 2011. It claimed dozens of lives, as it cut more than a billion-dollar swath of destruction across the eastern United States.

I watched it on TV in Washington just after emerging from jail, having been arrested at the White House during mass protests of the Keystone XL pipeline. Since Vermont's my home, it took the theoretical—the ever more turbulent, erratic, and dangerous weather that the tar sands pipeline from Canada would help ensure—and made it all too concrete. It shook me bad.

And I'm not the only one.

New data released last month by researchers at Yale and George Mason universities show that a lot of Americans are growing far more concerned about climate change, precisely because they're drawing the links between freaky weather, a climate kicked off-kilter by a fossil-fuel guzzling civilization, and their own lives. After a year with a record number of multi-billion dollar weather disasters, seven in ten Americans now believe that "global warming is affecting the weather." No less striking, 35 percent of the respondents reported that extreme weather had affected them personally in 2011. As Yale's Anthony Laiserowitz told the New York Times, "People are starting to connect the dots." More