Why Groundwater is Another Sea Level Rise Concern

Sea level rise brings to mind the threat of coastal flooding from menacing storm surges, with growing risks to shore-based infrastructure — but a new study indicates there’s another sea level rise-related threat that has so far slipped under the radar.

According to the study, as sea level rises, so will groundwater levels, and since underground infrastructure — including sewer pipes and utility equipment — was built with historical groundwater levels in mind, this could lead to expensive headaches for coastal communities. 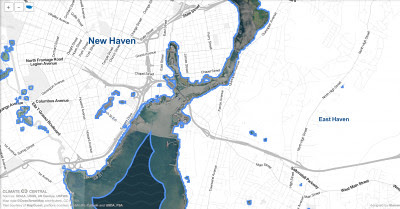 A projection for what New Haven would look like after three feet of sea level rise. Blue areas are at or below three feet in elevation. Click on the image for a larger version, or explore the interactive maps from Climate Central's Surging Seas project.

The study, by the U.S. Geological Survey (USGS) and Yale University, looks at the threat to New Haven, CT, Yale’s home city. Sea level rise may indeed raise groundwater levels significantly underneath the city, according to the study, leading to problems not just with pipes and pumps and buried cables but also with the arch-nemesis of many New England homeowners — basement flooding.

"Scenarios for the resulting higher groundwater levels have the potential to inundate underground infrastructure in lowlying coastal cities," the study states. More