Warming and the Water Cycle: More than Just a Faster Wetter Wet and Drier Dry 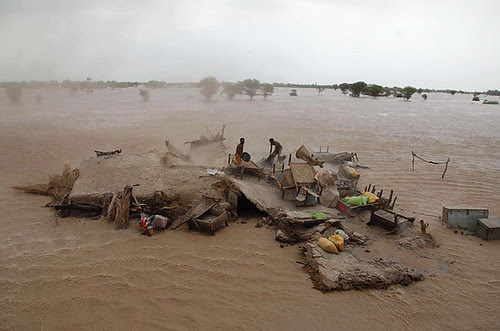 One of the most serious consequences of global warming is its predicted impact on the water cycle. A new study, described below, presents evidence that the global water cycle is changing even faster than predicted. A further concern is that future rainfall patterns may be extremely variable in both space and time.

Since the 1950s, parts of the world's ocean became saltier (red) and parts became fresher (blue) as the global water cycle intensified. The color scale refers to the observed change in salinity. The numbers on the scale correspond approximately to grams of salt per kilogram of seawater.

As the atmosphere warms, its capacity to hold water vapor increases. This is quantified by the Clausius-Clapeyron relationship, which explains that the atmosphere will hold about about 7% more moisture for every degree Celsius of warming. That means more evaporation in areas that are already dry and increased precipitation in regions that already receive high rainfall. Thus we can expect increasing droughts in dry areas and more floods in regions now prone to flooding.

In the 27 April 2012 issue of SCIENCE, Paul Durack of the Lawrence Livermore National Laboratory in California and coworkers explored a historical database of the saltiness of the surface ocean waters, or salinity, and found evidence that the global water cycle has intensified over the past half-century. The observed shifts in ocean salinity are consistent with the Clausius-Clapeyron relationship and with the observed warming of the surface ocean by about 0.5°C.

Noting difficulties in obtaining accurate estimates of rainfall over land, Durack and coworkers used ocean salinity as a natural rain gauge. Just as the long-term average evaporation and precipitation leave their imprint on land in terms of characteristic landscapes, they are recorded in the ocean by the saltiness of surface waters. The saltiest ocean waters are found in the subtropics, where the dry descending air of the Hadley cell causes evaporation to exceed precipitation. By contrast, surface waters at high latitudes tend to be less salty as precipitation is greater than evaporation. This pattern has existed for much of Earth’s history. More